Oi! Oi! It’s album number nine from the East End’s favourite sons. Released a full decade since their last album, East End Babylon, Power Grab is a distillation of all the influences and driving elements that have made the Cockney Rejects the national institution they are.

As if to demonstrate this point, Power Grab comes adorned with the Union Flag and the broken head of a guitar, hinting that this might be their last release as the band have already announced 2023 will be their final year of touring.

Should Power Grab be the Cockney Reject’s swansong then it is a glorious way to sign off such a long career. If you only know the Rejects from their early songs like War on the Terraces, The Greatest Cockney Rip Off and Oi! Oi! Oi! or the reputation for their live shows being a little rambunctious, then allow me to introduce you to a finely-tuned, well-seasoned Rock n’ Roll machine.

Press Play on Power Grab and the first tune you encounter isthe warm, almost Spanish guitar of Micky Gaggus, as he conjures gentle washes from his strings. It’s more Marbella than Margate and lays down a marker that here is a record that will defy expectations throughout. There’s but a moment until the rest of the band crash in, turning We Were Never Bothered into a driving rock track, Jeff Turner’s vocals as belligerent as his lyrics, making references to the history of the band.

There is a celebratory, yet melancholic mood to Power Grab as it embraces the forty-year plus history of the Cockney Rejects, with We Were Never Bothered making a sly nod to I am Not a Fool, the opening track on the band’s 1980 debut album.

Drummer Joe Sansome and original bass player, Vince Riordan lay down solid foundations across all fourteen tracks, giving Micky a platform to delivery meaty riffs and chunky, chugging guitar lines. Paper Tiger, That Thing We Do and The Cold Light of Day prove the Rejects are consummate masters of their craft and driving AC/DC-style beats dominateStab In the Back, Same Ol’ Same Ol’ and 40 Years Undeafeated. 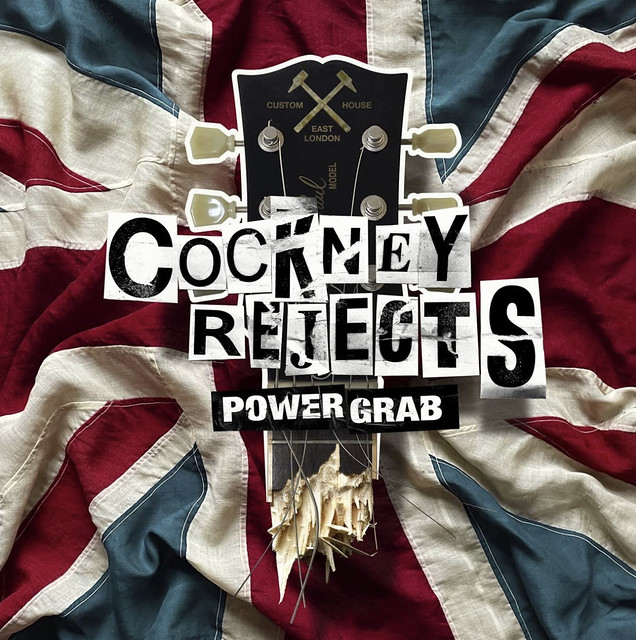 Fear not, Skinnies, for the Rejects have not abandoned their roots, mixing those fat chords and solos with their Oi! ethos on the in your face Up for the Fight and the critique of the wastrel class, Get Your Shit Together, both build around danceable rhythms and shout along choruses.

There are a few surprises on the album: My Heart Ain’t In It is an unexpectedly warm ballad; Runaway Boys sees Jeff trying a scat-vocal line and Learning to Fly closes the record with an acoustic reflection on the hard road the band have travelled throughout their career. Is it telling that this songs fades to silence? Only time will tell.

When you have a collection of songs this good it’s difficult to pick out highlights, but both Mug (You’re a Long Time Dead) and the title track itself, are contenders for some of the best material the band have ever recorded.

Mug returns to the Oi! ethos but combines that with whispered verse vocals and a Gothic sound. Coupled with the confessional nature of the lyric, it almost feels like a catharsis and a shedding of skin.

I think, however, it is Power Grab itself that is my preferred song here. The near-Motorhead opening resolves itself into an Eighties acoustic mode, favoured by the likes of Poison and their ilk back in the day, yet the Rejects imbue it with an epic feel. A critique of the current geo-political situation, Power Grab is gloriously constructed tune, juxtaposing lighters in the air moments with pit wrecking choruses. Add Micky’sperfectly pitched solo, and this could be the Cockney Rejects’most accomplished song yet.

As a huge fan of the band I don’t want to come over as a simpering sycophant who’d give Power Grab a five-star review whatever, it’s just that this is a phenomenal album of timeless rock and roll that should appeal to lovers of all forms of guitar-based music. And, if it is to be their final album, the Cockney Rejects have saved their best ‘til last.