Formed as far back as 2013 and seasoned campaigners following appearances at the likes of Wacken, Summer Breeze and Resurrection festivals, alongside jaunts with Rotten Sound, Eyehategod, Exhumer and more, Implore land only their fourth full-length in The Burden of Existence.

Five of The Burden of Existence’s ten tracks could be described as straight-out death metal assaults, with each taking a differing approach to the genre. Archetype plays around with a dirty riff, whereas Masochistic Tendencies goes for the kill with a barrage of whirlwind frenzy; The Sense of Endings and Prior Void bookend the album with some grooving elements and, mixed in throughout are a few beatdown sections. 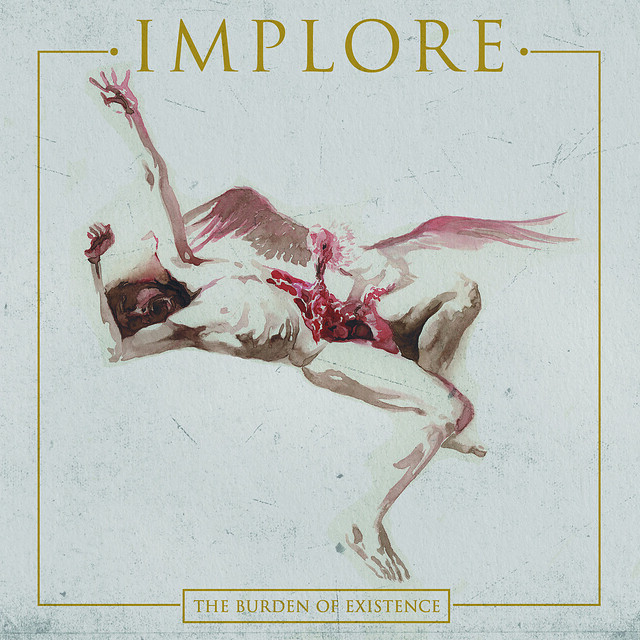 The title track and Accept the Loss are built around slow, chugging riffs and huge walls of sound. The Burden of Existence features some chopping drums, beating out off-kilter rhythms as the faintest whiff of a progressive guitar line chases through. Accept the Loss locks into a hypnotic riff that could repeat, ad infinitum, in an oppressive guitar tone.

The most unexpected moment on the record comes in the form of Love Will Gradually Perish’s post metal posturing. Another hypnotic riff, introduced and concluded by acoustic guitar, yet unable to hide the crushingly heavy bass.

Across the whole of The Burden of Existence Carol Lieb’s bass centres the music with thick, dense lines. Complimenting both Markus Matzinger’s amazing drum performance and Eduardo Petro’s guitar work to make every progression a massive experience. Not to be outdone, Gabriel Dubko’s vocals are raw throated and guttural, give texture to the intensity of the music.

The Burden of Existence is one of those albums that is both aggressive and imaginative and shows that creativity can come in many forms.