Ahead of their appearance at the Damnation Festival, Canadian Deathcore veterans, Despised Icon, release Déterré, a five-track EP, repackaging music from the band’s early days.

Both Warm Blooded and Bulletproof Scales were rerecorded for 2005’s The Healing Process album, but could be heard in their original versions on 2004’s Syndicated Murderers EP.Featuring the kind of raw-throated vocals and staccato riffing prevalent at the time, this was the first time original drummer, Alex Erian stepped out from behind the kit to take up vocal duties. Comparing the difference in both songs, across the span of one year is remarkable as, where the rerecords have an elegance about their brutality, these originals are all-out wrecking balls of frenzied energy. And, just to clarify, the differences are the same as the differences between Jason Voorhees and Pinhead – both will kill you, only one with relish in the inventive method of your demise. Although rudimentary, the seeds of the Despised Icon becoming one the scene’s leaders can be heard in both songs. 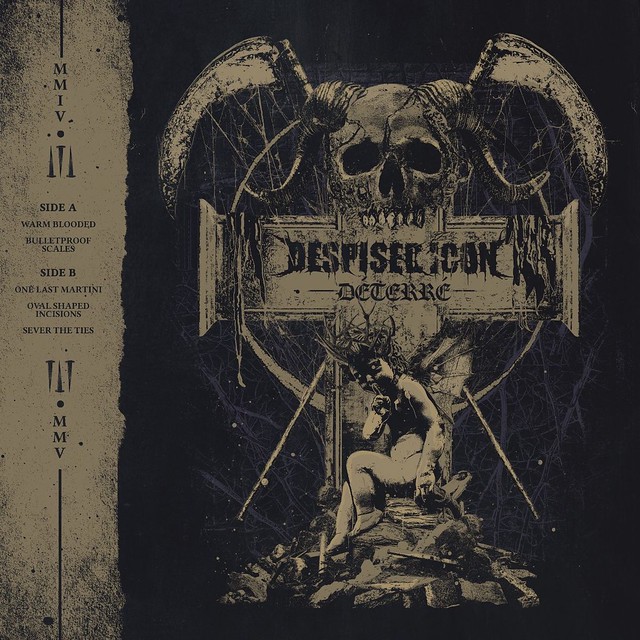 A year later, Despised Icon joined forced with Bodies in the Gears of the Apparatus, contributing One Last Martini, Oval Shaped Incisions and Sever the Ties to the three songs from the Floridians. There’s a significant change in the Canadian’s sound by the time 2005 came around, with the Deathcore elements being combined with Dillinger Escape Plan-type insanity and guttural vocals.

There is a definite move to a more refined sound in the latter three songs here, just as the band transitioned from the Death Metal of Consumed By Your Poison in 2002 and 2005’s The Healing Process, a progression that would continue with every Despised Icon release to date.

Despised Icon will take to Damnation’s stage almost three years since the release of their last studio album, Purgatory, and the prospect of them laying waste to the Bowler’s Exhibition Centre is enough to get everyone excited. Hopefully, Déterré will be but a place holder for an imminent full-length. In the meantime, have a stroll into the past and buckle up for the forthcoming devastation.