With members from the Ukraine and the United States, Sermon of Mockery is the latest act to be released via US powerhouse label Comatose Music. The band have set the cheerful title Crippler Crossface Murder Suicide for their release, which sees the band bring a display of savage death metal to the table.

As Crippler Crossface Murder Suicide opens you are greeted right away with a straight up dose of unsubtle violent brutality worthy of its gruesome title. It's frankly quite horrid sound instantly brings up memories of the classic old school brutal death metal sound of the late 90’s where rawness was the style's calling card, and let’s be honest for fans who enjoy those raw sounding records then Crippler Crossface Murder Suicide will offer a degree of charm to them. What I found enjoyable about Sermon of Mockery’s song writing through these four tracks is how they layer in grooves without them being the focal point of the release and taking away from the barbaric sound which is all throughout. 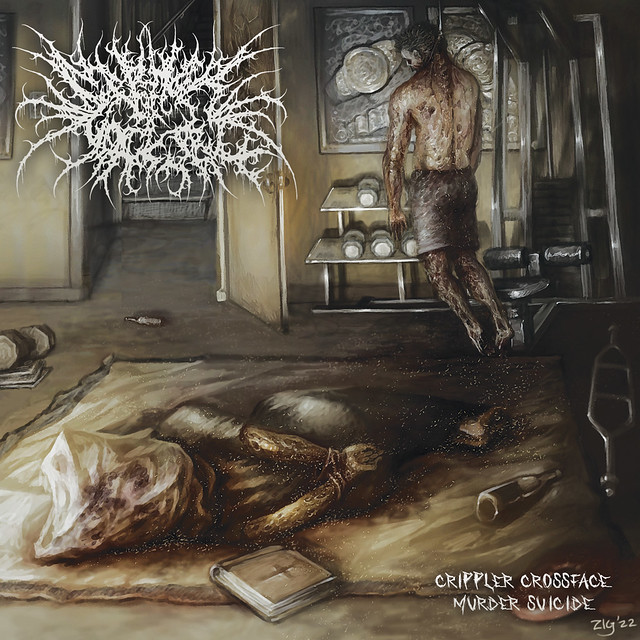 These grooves are really thick and sit really nicely within the songs, breaking it up just enough to set up the next round. Now I enjoy groove based death metal as much as anyone but I’ll always reach for all out straight up brutality as my preference and Sermon of Mockery do not reign in that brutal element, even when they add in more intricate lead guitar work it maintains that high octane brutal sound. Topping off and adding the finishing touches to Crippler Crossface Murder Suicide is offered in the form of Mortal Decay frontman Johnny Paoline who’s wretched vocals continue to add to the vibe of the releases classic brutal death metal approach with a mix of pure guttural fury and savage gurgling vocal techniques.

It’s definitely not pretty and is about as original as a pack of ready salted crisps but Sermon of Mockery delivers a vicious four track slab of all out brutality. It ticks all the right boxes as far as this particular style goes and is perfect for fans of bands such as Disgorge to sink their teeth into.