Thrash metal is, and always will be, my favourite of all the genres across the metal spectrum. Ever since hearing those first opening riffs to 'Fight Fire with Fire', I’ve been hooked on the aggressiveness of the music and love a guitar solo or two. So when I saw that Bay Area legends Blind Illusion were back with a new release after a long period of time away from the limelight, I was both excited and nervous at the same time.

With only one original member, Mark Biederman, left in the band, he’s gone and scouted the Bay Area for some band members for the next incarnation of Blind Illusion, and has recruited well, with Tom Gears on bass, Doug Piercy (ex-Heathen) on guitar and Andy Galeon (ex-Death Angel) on drums, so I dipped my toe into the latest release 'Wrath of the Gods'.

And it begins in typical thrash style, with opening track 'Straight as the Crowbar Flies', an all-consuming riff and pounding drums, greet the listener, the break in the music, allows the bass to be heard, then halfway through comes the guitar solo, which is allowed to fly free, dominating the song, as it continues to push forward and let everyone know what Bay Area thrash is all about. It’s easy to say that its formulaic, but there’s nothing wrong with sticking to a winning formula when you can do it this well. 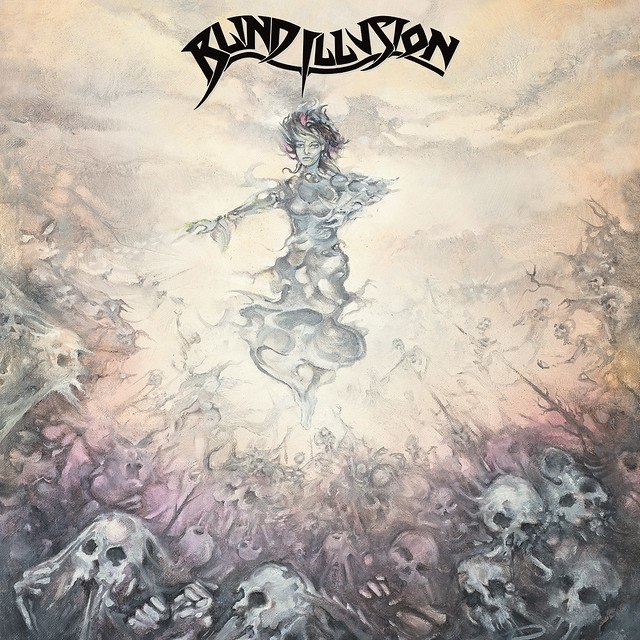 The question remains, can they keep this momentum going for the rest of the album? When the opening riff to 'Slow Death' is thrust upon you, you will see that it’s balls to the wall headbanging style riffage, and in my book, nothing beats that. It really is a throwback to the 80’s style thrash riffing that dominated the scene. So grab your hi tops, put on your tight jeans, get your bullet belt and just thrash until your heart is content.

The beauty of this album is that whilst is has many screeching guitar solos and abrupt rhythm changes, there are numerous times that the band slow down, let a power chord ring out and let the excellent drumming from Andy Galeon, kick start the songs. The riffs across songs such as 'Protomolecule' and 'Wrath of the Gods' are both crushing and technical, bit also extremely catchy and are wrapped around a tight song structure.

The riffs are kept fast and furious over the rest of the tracks, with a special mention to 'Lucifer’s Awakening', which has elements of Death Angel in it, by keeping the guitar licks catchy and full of energy, but not entering into the poseurs circle of trying to outdo each other, as all band members compliment each other perfectly, to keep this seven minute song flowing and keeping the listener pinned against the speaker, eagerly awaiting what comes next.

Despite several other recordings, 'Wrath of the Gods' is the true follow up to the band’s legendary 'The Sane Asylum' and they have done themselves justice with this offering of truly awesome Bay Area Thrash Metal.