Rasping vocals, a chugging Bay Area thrash / crossover feel and lyrics that draw deeply from the traditional metal of Dio and Mercyful Fate. Throw in influences from as extreme as Celtic Frost, Exhorder, Bathory and Discharge and you’ll have an understanding about High Command.

Formed in Worcester, Massachusetts in 2016, High Command’s second album’ Eclipse of the Dual Moons’ takes us deeper into the world that they have created through their ‘Secarhta Demos’ and first album ‘Beyond the Walls of Desolation’. “It’s one thing to make a good metal record, but it’s another to put on top of it a sort of overarching story that makes sense to listeners. The whole High Command project is enriched by lyrics articulating characters, a world, and trials faced within it. We want our records to be immersive and leave listeners with a feeling they’ve experienced something bigger than the music.”

From the opening title track, High Command cast a spellbinding web of intrigue as you follow the story and music as it unfolds. ‘Imposing Hammers of Cold Sorcery’ for example, is an expansive narrative, switching tempo and style several times across the course of its 7:40. The vocal delivery of Kevin Fitzgerald is crucial to the sound, his blend of death/thrash style adding a steely edge to the band’s muscular approach. 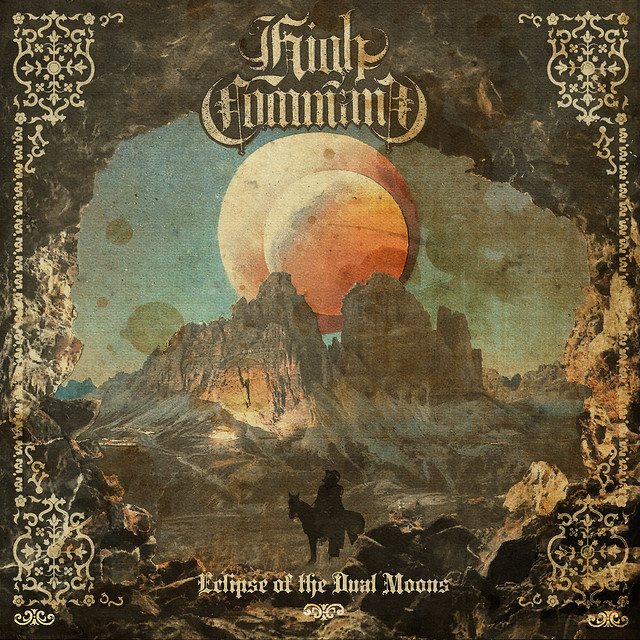 There are riffs, plenty of riffs, from the slower, chugging efforts to the more aggressive pile driving ones that explode in your face. Songs such as ‘Fortified in Bloodshed’ bring a huge sound, and whilst the band embrace their groove, it’s in a way that demands you attention. It’s heavy, with a driving passion that pushes the song along at a ferocious rate.

High Command save the best until last with the 11-minute ‘Spires of Secartha’. The narrative continues, adding to the atmosphere and tension as the song builds. Then it’s time to go as the frenetic riffs kick in and the pace is electric. It’s a monstrous beast that allows High Command to bring the album to a conclusion in epic and dramatic style.

There may be nothing hugely original here, but ‘Eclipse of the Dual Moons’ is intensely catchy, with plenty to appreciate. If you like your thrash metal mixed with everything from classic rock to death and black metal, this is an album you should be checking out.