Another weekend and another rescheduled event. But this wasn’t any old tour. This was the Opeth Evolution XXX show, celebrating the 30th anniversary of the Swedish progressive maestros. Apart from their headline set at Arctangent in the summer, this was the first time Opeth had visited the UK since their brief visit in November 2019 which saw them close out Damnation as well as slot in shows in Bristol and Glasgow. The band promised a set chosen by the fans back in 2020 and postponed in October 2021. Arriving at the legendary old venue some ten minutes before doors were due to open, it was evident that most if not all fans had held their tickets, with the queue snaking its way down the street. Anticipation was high, with excited chatter about the setlist that was likely to play out over the next few hours. It didn’t disappoint.

There may have been a few eyebrows raised when it was announced that Canadian progressive thrashers Voivod would provide the support. Undisputed masters of their own, unique style and sound, many in the audience were probably aware but unfamiliar with their music. It’s certainly a while since I’ve seen them, but they didn’t disappoint. 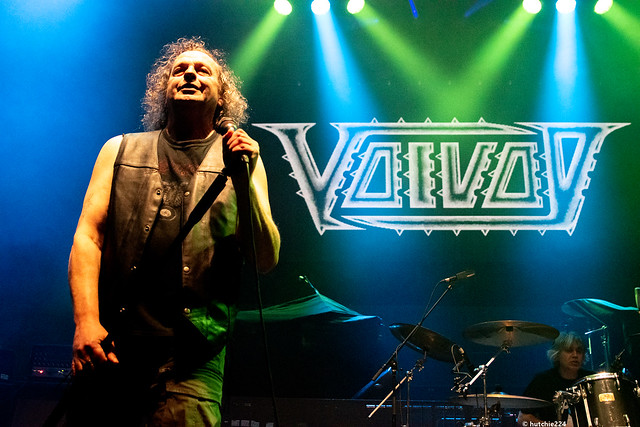 Due to the tight timing, the venue was rather empty as Voivod took to the stage at 7:30pm. For those that had made it in early, the reward was great. Launching into ‘Experiment’ from ‘Dimension Hatröss’, Chewy, Away and Rocky were soon joined by Snake, who swaggered onto the stage to great cheers from those in the audience who were appreciative of the band. Voivod don’t do anything flashy. They let their music do the talking. Snake is a restless spirit, patrolling the front of the stage, pulling shapes and gurning, possibly unintentionally hysterically at times. Chewy is a mass of curls and smiles as he cranks out the riffs whilst Away with his silver hair links as tightly as ever with bassist Rocky.

With some 15 albums under their belts, picking an eight-song set list must have been something of an impossible task. With 2022’s sublime ‘Synchro Anarchy’ still fresh in the memory, the band choose to throw three news songs into the mix. It paid dividends for ‘Holographic Thinking’, the title track and a huge ‘Planet Eaters’ all sounding immense with a decent sound. A simple but effective selection of lighting and a banner with the band’s logo was sufficient for visuals. By the time the band launched into their timeless cover of Pink Floyd’s ‘Astronomy Domine’, a song that they have now adopted into their history, Voivod had won over many in the now swelling throng in front of them. Huge cheers endorsed their set, and I’d wager that their streaming hits will have increased exponentially. 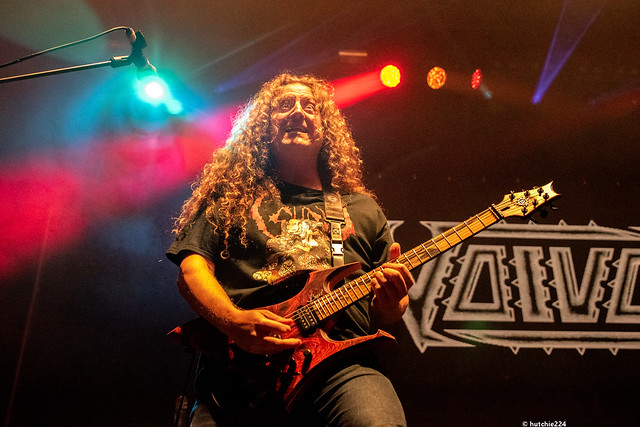 It’s something of a ritual to catch Opeth. I’ve seen the band in Wembley, the Royal Albert Hall, Drury Lane theatre, Prestatyn, various venues in Birmingham and Bristol as well as Bloodstock, Damnation and Arctangent. I’ve got a benchmark when it comes to what makes a good Opeth performance. This performance ranks amongst the very best.

Opeth have gone through several line-up changes over their 30 years, the most recent being the departure of drummer Martin ‘Axe’ Axenrot earlier this year, but he’s the first departure from the band in over a decade, with Opeth having been stable since the arrival of keyboard player Joakim Svalberg in 2011. New drummer Waltteri Väyrynen is hardly an unknown in the metal world, having done service with Bloodbath and Paradise Lost. His arrival shores up the rhythm section with Martin Mendez, the Uruguayan a steady presence in the band since 1997. Throughout the set, Mendez is a rock, unsmiling but steady, reliable and a focus of concentration. He pumps out those semi-jazz bass lines with ease, but you can see it’s the result of thousands of hours of playing and practice. 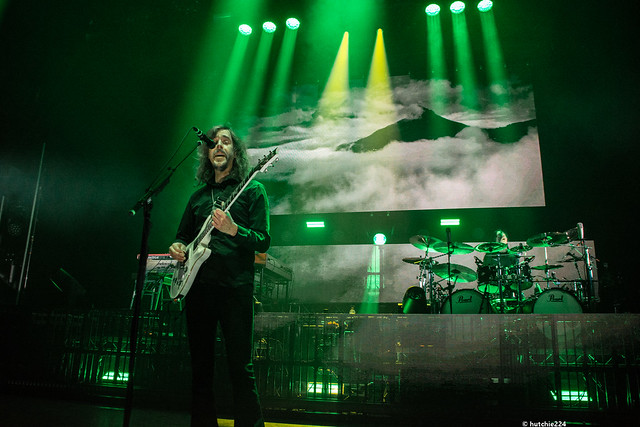 Väyrynen is simply mesmerising to watch. He’s joined a band that play two hour sets each night, with some of the most complex drum patterns and arrangements, yet he almost looks bored, as if he could be reading a book whilst he moves around his kit with octopus like ease. Halfway through the 20-minute ‘Black Rose Immortal’ he’s yet to break sweat, preforming fills, rolls and short, staccato blasts on the snare and double bass kicking for fun. Of course, he’s a top performer but the effortless delivery is just incredible.

Flanking frontman Mikael Akerfledt stands guitarist Fredrik Akesson, now into his 15th year with the band. Akesson is possibly one of the most underrated guitarists around, but tonight it’s his strong vocals during a duet with Akerfeldt on ‘Allting Tar Slut’ which is the jaw dropping moment.  “Who knew?” I asked a friend after the show. “Not me” he replied. “It was amazing”. Akesson’s guitar playing is stunning, his switch from rhythm to lead with Akerfeldt something to simply absorb. Their interplay is fluid, organic and sharp. 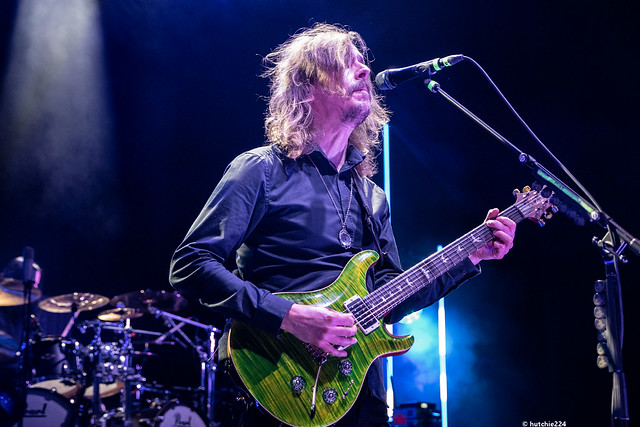 The sound is crystal clear. From the opening moments of the bone crunching ‘Ghost of Perdition’ that opens the evening, the delicate movements of ‘Windowpane’ and the audience participation on the rarely played ‘Harvest’ all the way to the bruising standard finale of ‘Deliverance’. Opeth’s biggest production to date wows the audience. Three split screens are placed across the stage, one large at the rear and two horizontal screens below and behind the caged area that houses Svalberg and Väyrynen. The visuals are impressive. Mendez is bathed in flames during ‘Demon of the Fall’, whilst a blood red moon appears for the song selected from debut ‘Orchid’, ‘Under the Weeping Moon’. The lights are a veritable treat. Rich banks of reds, blues, greens, yellows bath the band in different glowing elements. It all adds to a carefully thought out and crafted stage show. It may have taken them 30 years, but there is no doubt that Opeth are now in the premier league with a stage show to match their incredible music.

As ever, it’s Akerfeldt who takes the bulk of the attention. His dry wit is infectious, his tolerance of numerous hecklers confident. He puts the odd person down. The inevitable cry for ‘Freebird’ is dismissed with humour. His narrative is shorter than at some gigs, unsurprising given the length of the set, but he still cracks a few jokes, reminisces about early gigs at the Astoria and The Roundhouse, and appears genuinely fond of the band’s affinity with London. A quick burst of George Michael’s ‘Faith’ gets a huge singalong, with the crowd continuing after Akerfeldt stops strumming. You won’t get that at many non-metal gigs, but it was a great example of why metal fans are the most eclectic music lovers around. He’s also a fantastic guitarist as well as possessing a vocal ability which switches between demonic death growls and soaring cleans, as he does on the fan favourite ‘The Moor’, which has the crowd holding their breath. 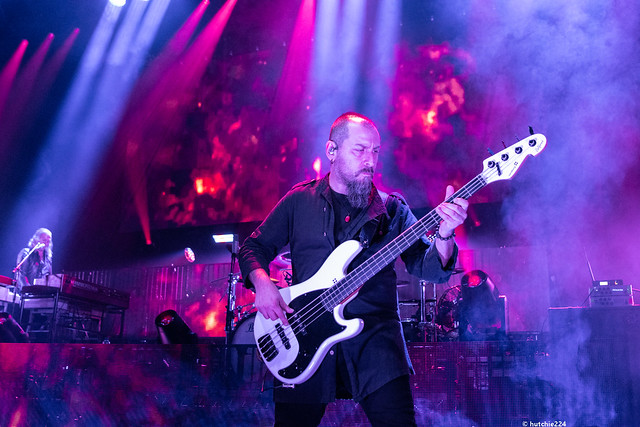 It's a well-structured set, perfectly paced with passages of ferocious intensity that sees the pit open many times during the evening, including a rather joyous jig during ‘Sorceress’ and an altogether more ferocious battle which ensues during ‘Deliverance’. It’s good natured, the crowd buoyed by the sheer brilliance that is unfolding before us. It’s almost impossible to pick out highlight from such a set. ‘Burden’ from 2008’s ‘Watershed’ is majestic, ‘Black Rose Immortal’ casts a spell across the entire venue for the full 20-minutes whilst the early appearance of ‘Eternal Rains Will Come’ draws gasps of appreciation.

Ultimately, this is simply a show that rapidly turns into an “I was there” event. Two bands in imperious form, a crowd desperate to drink in every note, and a venue fitting of such an event. As we poured out into the chilled London evening air, all one could do was reflect on the three hours we’d just witnessed. Smiles all round, happy in the knowledge that 30 years into their career, Opeth are still one of the most compelling bands around. 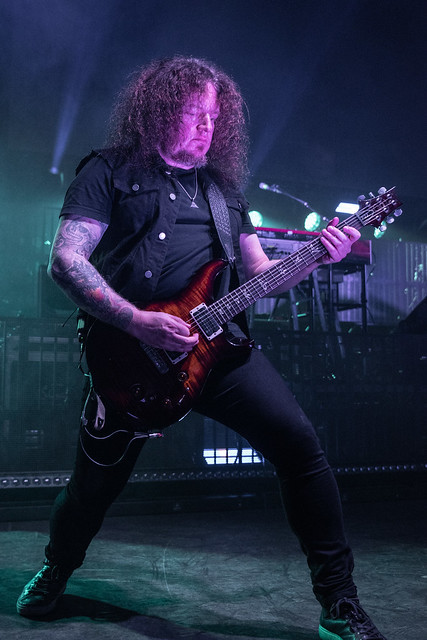