Jim: Sex & Religion by Steve Vai, it’s got Devin Townsend on it my favourite vocalist & Steve Vai my favourite Guitarist. It also has a song on it called ‘rescue me or bury me’ which suits this quite nicely!

Zorán: Others are going to hate me for it, but it has to be the first 3 Limp Bizkit albums. That is my childhood and when things get hard it is good to go back to times where things were a bit simpler.

Jim: Why Zoran, we jive to Limp Bizkit often, I love a bit of Limp Bizkit, also I used to chat with Wes Borland back in the Myspace days he didn’t have to talk to a lowly me but he did, LB rules!

James: I never did get Limp Bizkit, actually it’s Nu-Metal as a whole that I don’t really get, not that it’s bad... Anyway My album would be Moving Pictures by Rush. That was one of the first albums I had the drive to try and learn all the way through, And I think I’d still have most of the song structures stored in my head somewhere.

Kamil: Mnemic ‘The Audio Injected Soul’!!! This album changed my life. Obviously list of all best albums is long however this album is the first one that comes to my mind

Kozi: Hmm that is very hard to answer to be fair. It will be hard to choose for me as I do rise listen to RATM, Korn and many other great bands out there. But right now probably I will grab Claymen by In Flames – to be clear... only original version of the album

Jim: Kylie ‘Fever’ because needs must and Kylie will always look amazing, you can’t deny that can you eh?!

Zorán: I will go with Jim’s option. I don’t know what it is, but I trust his judgement.

Jim: you make sure it’s clean if you use it ok?

Kozi: I never liked posters then I will not have anything. If that will be a possibility, I would rather hang sound isolation to work on my mixes (if gear will be there of course)

Jim: And when the time comes, you’ll need time with my Kylie album as well by the looks of it!

Jim: It’d have to be something that gets me really hammered so I’d choose the clich’e Rock n’ Roll Jack Daniels I think!

James: I’m partial to some JD, but I drink tea more than anything.

Zorán: A good pint of Guinness. I will suffer later, ha-ha!

Jim: We might use it to seal the mud shack!

Kamil: Again list is long lol. If it’s only one drink I would have Jamison on the rocks with some coke.

Kozi: I will go with a tea, but black tea no milk!

Jim: It’ll be my Ramage Inc. T-shirt as it’s made of nicer material than any other T- Shirt I own & I love that band, so it’d be a nice bit of free advertisement for them if we did get rescued and made the papers!

James: Probably my Callidus Descipio shirt. Nothing too sentimental behind it, they’re a band that supported one of my previous bands, and the shirt of theirs that I have is just really comfy.

Zorán: I have picks and flyers from most of the bands that we play with, so it really depends on who did we recently played with.

Kamil: Mastodon- Once more ‘Round the sun. Again I have to admit that the list is long lol

Jim: I think I’d still choose my band mates, I’m not sure who I’d eat first though should that ever need to happen, but up until that point I’d teach them to sing!

Zorán: Jim is not wrong, but I have a different idea. Kamil would be really entertaining the whole time.

James: Not only is Kamil entertaining on his own, but he and Jim argue like an old married couple.

Jim: My girlfriend thinks we’re in love too!

Kamil: Hahaha. Probably I would be the best companionship for myself lol

Kozi: That will be a good time for me to learn how to swim and try to find food somewhere while diving. But yeah, I will need also start to like sea food......... And I can’t disagree with James, where is Kamil there is fun. 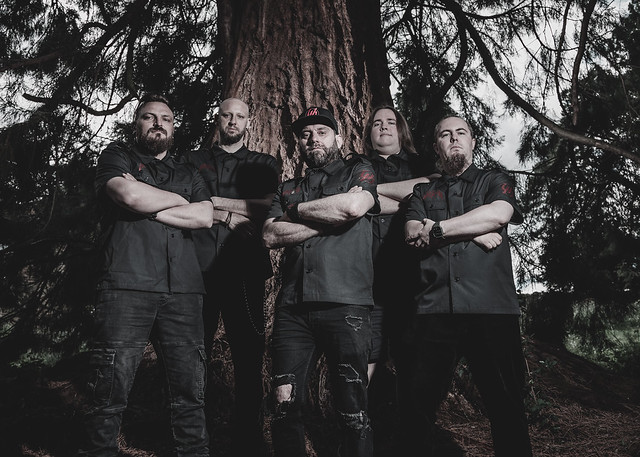 Jim: It’s Iron Maiden’s Live After Death for me I’m afraid, again a little cliche and there are other greats but that one I’d be happy to listen to until the batteries ran out, I did have that on double cassette once, I wonder what happened to it, I bet it’s on it’s own junk island somewhere in India, I've seen loads of live shows but can’t remember them!

Zorán: 2014 Machine Head, Roundhouse, London on the 7th of December. I was born on the 8th and they were jamming Pantera riffs at midnight for the memory of Dimebag. It was my first Machine Head show and the first show I ever went to in England. Such a unique thing for me.

James: Blind Guardian at The Forum 12/04/2015. I went to that show with two really good friends of mine, and I think hearing ‘The Bard’s Song’ being sung by about 2 thousand people is one of the most haunting things I have ever heard.

Kamil: Slipknot – Disasterpieces from London. That was amazing show

Kozi: I don’t know how many years ago it was but I think it was over 10 year and when I still lived in Poland. Me and my mate went to see Sting as he won a few tickets and this was really great music adventure.

Jim: It’s Marcin from Ramage Inc “mate we’re stranded on an Island somewhere, the Scottish are strong please could you swim over and get us?”.

Zorán: I would text one of the nuisance people that are calling me about the accident that wasn’t my fault. I am sure they would find a way to get in touch with me.

James: The scam callers will always find you, Zorán. I’d try and contact Johan from Amon Amarth, I’m sure they have a longboat they can sail to us with.

Jim: that’s a good answer to be fair James how cool are longboats!

Kamil: I would send my bottle to Jeremy Gomez from Red Method. I’m sure that he will help us

Kozi: I think I will send a message to Head from Korn as he will do everything to save me.

Jim: Well sorry James but you are a tall monster and could feed the 500 for a month, although tough one really because decent drummers are like rocking horse shit these days!

James: You could have thought of a better reason to spare me, but I’ll take it.

Jim: Well you’re a lovely person too but I think that makes you nicer to eat!

Zorán: I think we have to battle it out and the weakest gets eaten. I mean... it is logical.

Jim: I see you’ll get me drunk and feast on Jack Daniels flavoured pork then!

James: There wouldn’t be enough of you to go around, Jim.

Kozi: I would rather sacrifice myself.

Kamil: Zoran looks tasty lol. I’m joking. I’m hungry all the time. Even after 2 hours trip by the van to the gig, I have to eat something. The truth is if we were all stuck together on the island. I would eat all the members of the band lol. Haha sorry guys!!

Jim: Deal, ‘everyone, Kozi says all you can eat for a fiver’!

Jim: Well it’d be Kamil because we’ve been there together making music since 2014, if you ask me this question in 10 years I might have a different answer, he certainly makes me feel grateful for my own life!

Zorán: There are so many people that have influenced me, it is really hard to choose, but I would say that the second guitarist from my band in Hungary. He basically taught me how to play.

James: Probably Gene Hoglan. I make it no secret that he’s an idol of mine. I picked up most of my technique from watching The Atomic Clock DVD far too many times.

Kamil: I think that would be Jim. He has huge impact on my creativity, good musician and we were together in the band from the beginning.

Kozi: Hmm. I can’t answer this question as there is too many people. Used to be a guitarist and had different influence then I do have now playing da bass. Shout out to all my friends who passed away and still are with us!

Jim: Are you seeing ghosts then?