Sophie: That's an easy one, Operation Mindcrime by Queensryche. I could honestly listen to it on loop for hours- best album of all time!

Dave: There are a lot of albums that I’ve loved over the years, but I always go back to ‘III Sides To Every Story’ by Extreme. I bought it when I was about 12 years old and it was really a gateway to progressive rock, symphonic rock and all kinds of stuff. It’s such a great album for light and shade, there’s some great singles on there but also some huge emotional songs, particularly ‘The Truth - Everything Under The Sun’. If you mention Extreme, most people tend to go for Pornograffiti, with all the big singles. ‘III Sides..’ Is more of a Marmite album I think, you either hate it or love it. I think it’s one of the most under-rated albums of all time.

Jon: Oh, I’m gonna have to go with Ritchie Kotzen's album 'Into the Black'. The record struck a nerve with me in my late teens as I was going through some darker moments. Every time I put it on it sounds like I’m listening to it for the first time yet still feels so familiar at the same time.

Alex: A night at the opera by Queen! The arrangements, versatility of genres and stylistic choices are very smart and original!

Sophie: Probably Ghost Reveries- Opeth. I love that image and it's a fantastic album.

Dave: I have Sophie’s original painting of our album artwork for ’Separate Sides’ on the wall in my studio, it’s next to me as I type this! But if I have to choose something by someone else it would be Boston’s debut album. The spaceship-guitar with the skyline on top, it’s just so crazy and epic! It also just reminds me of listening to ‘Peace of Mind’ and ‘More Than a Feeling’ on my parents record player when I was about 14.

Jon: For me I’m putting up Whitesnake's 1987 album! Great artwork and in my opinion the bands best line-up.

Sophie: My drink of choice is a double vodka diet coke, I don't think I'd ever get bored of that, but I guess I'd be drunk the whole time in that case.

Dave: That’s really hard, I get bored of drinking the same thing over and over on a night out. I usually switch between bottled beers and various spirits, sometimes cider too! If it’s a desert island I’d have to go for Southern Comfort and lemonade, it’s my summer drink.

Jon: It has to be beer, an IPA of some sort. Nectar of the gods! I believe beer was often giving to sailors in vast amounts as part of their daily rations as water was so scarce. Therefore, I’d imagine having beer on tap could help subsidise any water intake on such a parched desert island. I know Sophie and Dave like their spirits which often leaves one with a hefty hang over and devilish thirst, I would be in a position to offer them my ration of h20 🙂

Sophie: I mean, Dave is not only my bandmate but my partner and best friend, so this is not really sounding like too bad of a situation to be honest because there's no one I'd rather be stuck on a desert island with.

Dave: Yep, Sophie is my girlfriend and Jon and Alex are really good guys. If we were stuck there indefinitely it would be nice to have my family there too, particularly my awesome little nephew Kai. But otherwise it sounds pretty perfect. Were we travelling with our instruments on the way to some shows? We could jam all day!

Jon: I'm sure Alex would have mentioned some one like Motley Crue or Tommy Lee. Yeah sure it would be fun for 48 hours but for an eternity? That would be savage! We're all pretty good mates in the band and we all get along pretty well. Dave and myself go back relatively far and have been on the gigging rollercoaster for almost a decade and half, Dave may be add a few years to that number so yeah I couldn’t see myself hanging out with anyone else but the Circus crue \m/ 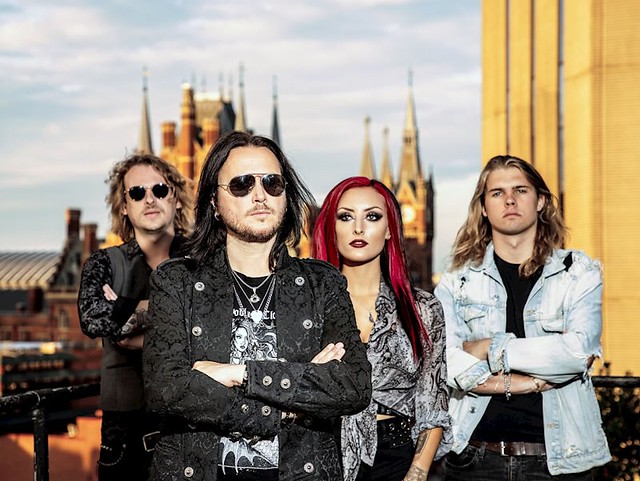 Sophie: Both Nirvana and Alice in Chains performed absolutely legendary MTV Unplugged shows (I get that it was a TV show, but I think it still counts as a live gig). I love how you can feel and hear the intimacy of those gigs, and they really captured an unrepeatable moment in time. I think I'd pick the Alice in Chains show if I had to choose.

Dave: The Freddie Mercury Tribute Concert, Wembley 1992. I saw it on TV when I was 11 and it was the moment when I decided what I wanted to do with my life. Plus, there are so many of the most legendary rock, pop and metal bands of all time on one stage together, is that cheating?

Jon: Haha a walkman? They haven’t been around since the late 90’s! Unless you're counting the CD ones which you would have squeeze into your side jacket pocket as they wouldn’t fit into your typical jeans. Funnily enough, I found my dad's old walkman while rooting around in the basement. It had Iron Maiden's 'Piece of Mind' album wedged inside of it . With a couple new batteries and a quick dust down I spent the evening blasting it out through the cans! So yeah, I’m gonna have to with a show from the Somewhere Back in Time tour.

Sophie: I'm trying to think of someone who seems like they'd have good survival skills... I think Bruce Dickinson has some military experience so that sounds like it might help.

Dave: I was gonna say Bruce, he can fly planes and nearly died playing a show in Sarajevo, he’s the guy! But as Sophie got there first, I reckon Henry Rollins would be my next choice, he’d be able to handle it.

Jon: The Police/Sting... motherfucker wrote a song about it!

Sophie: I'm a gatherer not a hunter haha! I would definitely rather die than resort to cannibalism, particularly as I don't eat animal products of any kind, so I guess if Jon and Alex really wanted to then they could feast on my corpse.

Dave: I think Sophie and I would go off foraging for nuts and berries and leave Jon and Alex to try and eat each other!

Jon: Initially I was gonna say Alex. He’s fresh meat and probably tasty as far as humans go, less toxins that come with age and years of debaucherous behaviour and all that…. But on the other hand Sophie and Dave are both vegans so I doubt they would be inclined to consume him, this island is pretty rock n roll and has a pub/bar which most probably serves dry roasted peanuts, they all do. That will keep them going for a while. Dave is a bit older than I am so he would probably be the worst tasting of the bunch, a bit leathery I could imagine 🙂 so for that reason I’m going for Sophie, Sorry Soph…. but at least 2 of us would survive.

Sophie: That's a tough one, my music career is only just beginning so I suppose I'm thinking more about someone I look up to. Robert Smith is definitely a musician who has influenced me in more than one way, and he seems like an overall awesome person with a really interesting outlook on life that I tend to agree with.

Dave: It would have to be Brian May. He’s one of the main reasons I started playing guitar in the first place, he’s a great songwriter and a really humble guy, having met him once. He turned vegan in his 70s! He stood up for the badgers! He built his first guitar out of wood from a fireplace! He’s also an astrophysicist with an IQ of 180! Every day I try to be a little bit more Brian May.

Jon: Doug Aldrich. A great guitarist and a really nice man. I met him in Brighton and we had a chat and he gave me a hug and a bunch of picks.