Returning six years after their last album Wildfire, Deströyer 666 unleash album number six Never Surrender and aim to prove that they are showing no signs of slowing down or taking it easy. In their words they ‘continue to do what they are best at: kicking ass and hammering out heavy metal that is slamming straight into the face. No compromise, no sell out, no bullshit!’

Deströyer 666 formed in Melbourne in 1994 and released their debut album Unchain The Wolves in 1997. The band eventually relocated into Europe to satisfy the demand for touring and festivals and have remained in the continent since. Never Surrender pretty much picks up where Wildfire left over being a caustic blend of black and thrash metal with lashings of trad metal thrown in for good measure. It is a sound that is unapologetically old school and gloriously so with plenty of gnarl and vitriol as well as fist pumping and head banging energy. The title track is pure heavy metal glory with a melodic undertone to it as well as plenty of black thrashing snarl to it. 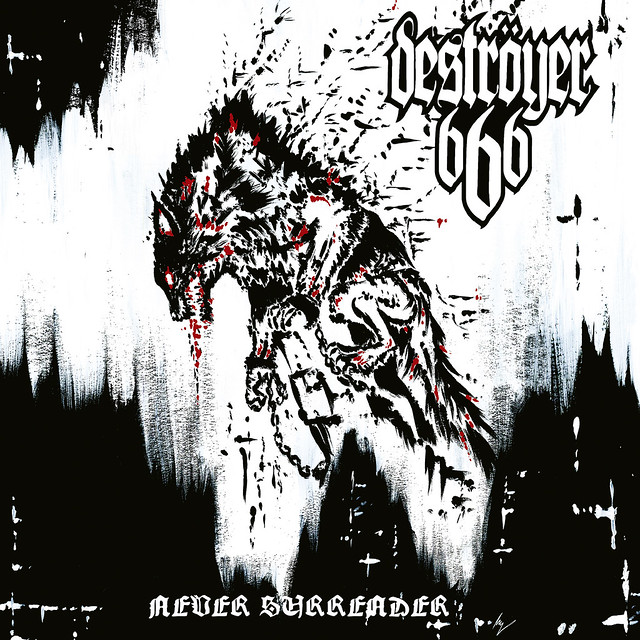 Pitch Black Night ups the blackened sound whilst also remaining positively anthemic with thrash style ‘gang’ vocals which can also be heard in abundance in the scathing Guillotine. Grave Raiders and Rather Death are both absolutely killer tunes and probably my favourites on the album with tons of traditional heavy metal influence permeating throughout whilst managing to be equally catchy and gnarly as hell. The album concludes with Batavia’s Graveyard which is the most melodic and epic sounding song on the album and concludes Never Surrender in grandiose style.

Never Surrender is another fine album from Deströyer 666. New albums from the band are infrequent but with Deströyer 666 it is definitely a case of quality over quantity and Never Surrender is definitely an album that will be worth the wait for fans of the band. It shows the band playing to their strengths and whilst some would deem this more of the same it is Deströyer 666 doing what they do best and giving us 40 minutes of killer blackened thrash and heavy metal.