I have the astute pleasure not only to introduce 2023 with my first album review, a Funeral Doom album, but with Ahab’s first full length release in eight years. Formed back in 2004 out of Baden-Württemberg, Germany, Ahab are considered amongst the most incremental European acts when the question of Funeral Doom is raised. Their debut album, 2006’s The Call Of The Wretched Sea, is considered a modern masterpiece of this style of doom metal yet immediately afterwards Ahab, riding high on their successes, were quick to start adding new elements into their songwriting which would help their sound differ to their contemporaries. 2009’s The Divinity Of Oceans and 2012’s The Giant eventually followed suite, as did 2015’s The Boats Of The Glen Carrig and while a Box Set was released, and a live album no less, the Ahab engine went quiet. Now, at last, nearly a decade on, Ahab return with their fifth full length record: The Coral Tombs, and for a January release no less. A grand fan of Ahab, i clamoured after this record and thankfully I have this to share with you today.

After eight long years, it’s fantastic to acknowledge that Ahab approach The Coral Tombs as if nary a second has transpired since their last record, with an opening track that propels immediately into the drowning mire of things; thunderously deep vocals and a powerful deathened soundscape propagate the record out of the gate. But as Ahab have otherwise demonstrated they aren’t afraid to set things back into something more comfortable and appealing to more conventional metal listeners. The same is no different here as Ahab alternate repeatedly between the more rampant and vicious offerings of songwriting, with instances of serene and relaxed sections that allow us to breathe. These sections may not be that prevalent throughout other funeral doom projects but Ahab understand that the audience needs time to unwind after being projected to such a visceral array of elements coming at them at once. They ultimately make the crushing moments feel more earned and, as a result, our attention is instantly heightened because they feel more special and cherrypicked throughout the songwriting.

Keeping in turn with all things nautical, Ahab look to Jules Verne’s masterpiece, Twenty Thousand Leagues Under The Sea, for inspiration this time round. Now, I actually read this book myself only last year and observing the track titles herein: “Colossus Of The Liquid Graves”, “A Coral Tomb” and “The Mælstrom” brings to mind exactly what I experienced and enjoyed whilst reading the book. With that said though, I never felt like Ahab would prevent other people from enjoying the context of this story if they hadn’t read the book. Even if I hadn’t read the book or didn’t know much surrounding the story, I could dive (no pun intended) into this album with no expectations and the band would be there to guide me along to enjoy all they have to offer. That’s always the risk with such themes, will the band play too closely to the expectations of their audience having already experienced the source material to get most out of their work? That isn’t the case with Ahab, much as it was throughout The Call Of The Wretched Sea, wherein scores of people adore that record whilst having never read Moby Dick themselves. The band keep their music and minds open to all manner of peoples who may wander across this album. 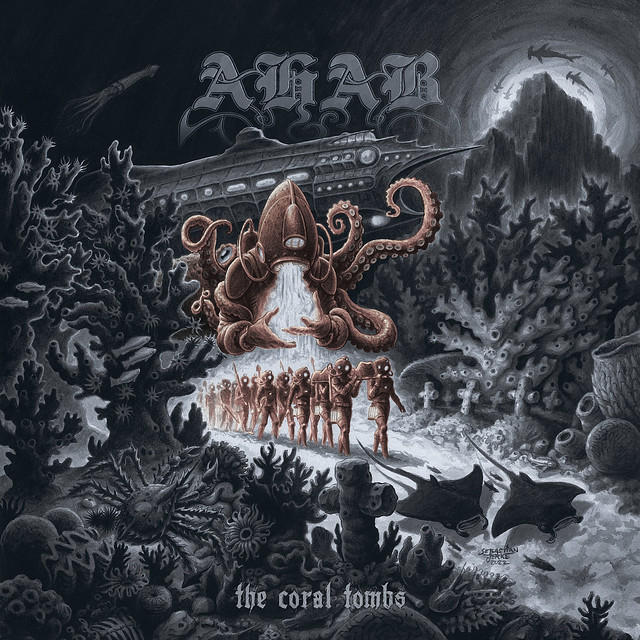 Funeral Doom is more often than not bookmarked by devastating riff barrages that consume and command our attention, becoming totally immersive to the point of near suffocation. That’s where Ahab, once more, differ from their contemporaries in this case. We know what Ahab are about, we know how their songwriting operates but it’s only now, experiencing The Coral Tombs, that I finally understand why the band have been so applauded for their branch of songwriting. We receive all the offerings of power and the crushing soundscapes yet, even at its most seething, Ahab’s sound is never compressing. We’re able to feel the full weight and might the band can throw into their performance without the crushing need to breathe increasing upon our chest. It’s a Funeral Doom album that allows us the room and space to catch our breath and work out, coherently, what is happening at any given moment. That’s why the quieter, more atmospheric segments now have such importance throughout their songwriting; not only do Ahab have avenues by which their sound can mellow out but it acts as a structural juxtaposition that stands against the bellowing, guttural nature Ahab are otherwise renowned for. One aspect of their sound is constantly giving the other renewed significance and, together, they form a complete whole that cannot be ignored.

It strikes me as fascinating that the structure of this album changes suddenly as we undergo the fourth track onwards. The first three songs are each around 7/8 minutes long whereas all others afterwards are reaching the 11/12 minute mark. Going into this record knowing it’s a 66 minute affair can be daunting for a lot of people, longtime fans will have zero trepidation regarding how their time will be spent, but newcomers may see such time and feel nervous as to how they’ll be rewarded for such attention spans. It’s therefore excellent to know that Ahab spend time here wisely, the balance between crushing and serene sections is just right, as mentioned beforehand, giving their sound the wholeness a Funeral Doom record often requires. Great swathes of these tracks will be dominated by the calmer side of things, which in the long run makes for an easier listening experience since our senses aren’t going to be bombarded for 12 minutes apiece. Regulation is the name of the game and Ahab, now on their fifth album, understand the rules perhaps more clearly than anyone else in the Funeral Doom scene right now.

In conclusion, Ahab’s return to the studio comes with a record that is easily amongst the best of their discography. Their debut album is never going to be topped as far as the fanbase is concerned, however The Coral Tombs absolutely places high enough for many, I am convinced, to take especial notice once it drops. With a timespan well over an hour long and comprised of songwriting that isn’t always concerned with how crushing and brutal it can be, The Coral Tombs is a record that reminds us how essential songwriting truly is for doom to make the most of its impact. The band have got everything right where they need it to be; the guitar work is just the right level of totality that it manages to command our attention without subjecting it to imprisonment, the vocals are ruthless enough for us to dive into them without quelling the broad range the cleaner vocals are able to impart. All in all, The Coral Tombs is a celebration of all things Ahab and it’s great to see these guys make a marked return with a studio record that exemplifies the hype that always gathers round them. Funeral Doom can often feel time-consuming owing to the attention required to receive the most out of the album, but Ahab have figured out how to cut out the unnecessary corners and get right to the thick of things. A glorious way to kickstart 2023.