Album Review: Gang Green - We'll Give It To You
Reviewed by Dan Barnes

In his seminal work on the subject, American Hardcore, Steven Blush makes the statement that, although the Boston HC scene might not have produced the best bands, they were the most intense (177). Bands like DYS, The FUs, Negative FX, Jerry’s Kids and more all came to define the sound and ethos of the underground music emerging from the state of Massachusetts; but it was SS Decontrol that would become the fulcrum around which the local scene turned.

SSD’s message was a factor in the advent of the Straight Edge movement with their rejection of the decedent and hedonistic music scene – and society in general - of the time. Although Gang Green would appear on the compilation This is Boston, Not LA alongside the likes of The FUs, Jerry’s Kids, The Freeze and the Groinoids, they didn’t really fit the mould nor tow the party line.

While the Boston HC scene became the manifesto of Straight Edge, Gang Green’s position was the polar-opposite: they revelled in the party-hearty lifestyle of drinking and smoking weed, wrote songs about not taking things too seriously and did so in a manner unacceptable to the purists.

Come 1986, and bands like SSD, DYS, Jerry’s Kids and the FUs had ditched the hardcore to become Heavy Metal bands and, as Blush opines, “none were very good at it” (189). But this is where we pick up Gang Green’s story, thanks to Cherry Red Records new four-disc set featuring the band’s second and third records, a live album, an EP and a compilation, all from the band’s Roadrunner days.

Disc One is the sophomore record and Roadrunner debut, You Got It from 1987 and shows a metamorphosis of Gang Green, where the last elements of the Boston HC sound are expunged and the four-piece become free to head off into heavier, thrashier waters.

There are still vestiges of the old scene on the record; both opener Haunted House and Somethings are built around a fast, simple riff and the vocals of Christ Doherty maintain the aggressive monotone of The Kids Will Have Their Say or Kill for Christ.

You don’t have to wait too long before being greeted by Gang Green’s next phase, as We’ll Give It to You announced their intention to thrash your head clean off your shoulders. What might be considered cliché in 2023 was fresh and new back in 1987, so Doherty and Fritz Erikson’s thick thrashing riffs and Brian Betzger’s pummelling drums, underpinned by Joe Gittleman’s bass work, all fit together to form a blitzkrieg.

Further thrashers Another Bomb, Whoever Said and the accurately titled Party With the Devil cement Gang Green’s credentials as a valid member of the burgeoning thrash scene of the day. The lacuna between these phases can be heard on L.D.S.B. and The Climb, where the hardcore and thrash sound meet and crossover, providing a combination of styles and delivery that is not a million miles removed from what Suicidal Tendencies were doing early in their career.

Elsewhere, You Got It is Gang Green’s love letter to Classic Rock, slower and more measured than the thrashing, but no less enticing. Sheet Rock, Ballerina Massacre and Skate to Hell press pause on the aggression to offer a more sedate sound. Born to Rock leaves you in no doubt that there are certain Cock-Rock sensibilities going on here.

Going slightly off course next as the last six tracks of Disc Three, taken in isolation, form the band’s 1988 EP, I81B4U. Taking the thrashing party to another level, the disc opens with the beer-soaked anthem, Bartender, whereas Lost Chapter picks up the mantle of 1980’s rocker. 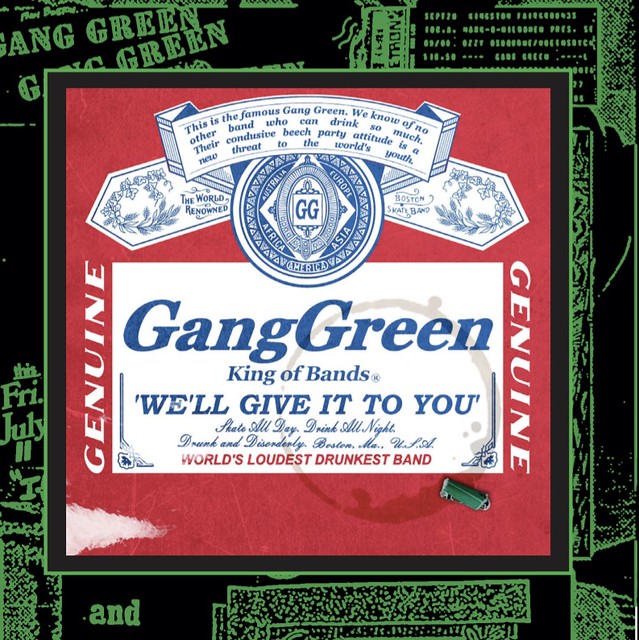 I81B4U acted as the bridge between You Got It and 1989’s Older… Budweiser, which saw the band relocate to Rhode Island, recording outside of Massachusetts for the first time. It was also the first time Gang Green shared writing credits as opposed to Chris doing all the composing.

For the recording of Older… the band’s line-up was unchanged but following its release there would be a switch of bass player.

This alteration of band dynamic gave the new record a different sound, one a little more mature and less focused on the themes of partying and booze and more on more immediate issues of the day. Firing shots at the rampant hypocrisy of the TV-angelists was de-rigour for Metal bands around this time, with Church of Fun arriving after Ozzy’s Miracle Man and before Maiden’s Holy Smoke. Gang Green blended their hardcore punk with thrash, unveiling a more hard-edge crossover sound that would go on to become the blueprints for Municipal Waste, Cryptic Slaughter, Toxic Holocaust and more.

We Can Go is the band accepting they disappointed some fans by changing their sound but maintains the core message that it is the music that really matters. The frenzied opening bars and Suicidal-like progress even features Chris giving shout-outs to Murphy’s Law, Nuclear Assault and Wargasm. Nor are they any less confrontational on Why Should You?

The thrashing elements rise to the fore on Casio Jungle, I’m Still Young and Flight 911, along with the hook-riddled grooves of Just One Bullet. As was the style at the time, Gang Green even emulated the likes of Testament, Megadeth and Annihilator by slotting a wholly unnecessary acoustic number in The Ballad, though you can hear the band’s tongue in their collective cheek.

Both Tear Down the Walls and Bedroom of Doom have a certain 80s LA vibe going on but, if Older… Budweiser was Gang Green’s balancing act of placating the older fans and appealing to the new they manage it in some style. Listening back to it again, after all these years, it feels as though this is their magnus opus.

Recorded at London’s Marquee Club in February 1990, Can’t LIVE Without It is a record of which Miles Hacket, of Down For Life magazine, said: “[Is] Gang Green at their peak finest; fast, furious and most of all fun.” (80). He does contend the crowd noise has been over-dubbed in his mid-pandemic retrospective review of the show and, in all honesty, it’s a valid allegation from the start.

With Joe Gittleman gone, it was left to D.R.I.’s Josh Pappe to provide the low-end. Crowd noises aside, and Mr Hacket’s assessment of the night transposes onto the audio; it’s fast, furious and frenzied and you can almost feel the stench of sweaty bodies and the sole of a white high-top trainer connecting with your temple. Oh, to be young again!

The set draws from all three albums to date, with a healthy showing from the Another Wasted Night debut sitting comfortably with the later songs. Have Fun, Voices Carry and the obligatory Alcohol rubbing shoulders with Just One Bullet, Bartender and Born to Rock with seamless ease.

The fourth and final disc of this collection is the 1991 compilation King of Bands and of the studio cuts not featured elsewhere in We’ll Give it To You, the anthemic mission statement and strangely bluesy Alcohol and the Rose Tattoo sounding Another Wasted Night come from the 1986 version of the debut; while Fuck In A is lifted from the 1991 re-release and is some studio shenanigans.

Bookending the record are previously unreleased Thunder and Rub It In Your Face, recorded by Chris and Brian with Kevin Brooks on bass and Mike Lucantonio taking over the six-string slinging.

This would be the last new material Gang Green would release until 1997’s Back & Gacked EP and the full length Another Case of Brewtality. To date, these are the band’s most recent products, which is a real shame as the potential of Gang Green is writ-large throughout this collection.

A real nostalgia trip for sure, but you don’t have to old and decrepit to enjoy what is genuinely some of the most pit-tastic music committed to vinyl.