Now in their tenth year, Black Star Riders release album number five, four years after Another State of Grace. It’s a little shocking that this is the band’s Earache Records debut, being one who associates the Nottingham label with the likes of Napalm Death, Carcass and Bolt Thrower.

None of the Ghosts of Earache’s Past have found their way into Black Star Riders’ new record and what we are presented with is a straight-ahead Hard Rock album. Don’t, for one second, think I’m using that as anything other than a compliment because, sometimes, that is precisely what the doctor ordered.

Wrong Side of Paradise is eleven rockin’ tunes that do not look to reinvent the wheel, rather to move you in the places good rock should. The title track launches the opening salvos of pumping rhythms and soaring guitars, with the only ghost here being the band’s obvious links to Thin Lizzy. Ricky Warwick has always channelled Phil Lynott with an effortless ease and the beginning of this new record establishes us on a familiar ground. BSR don’t take the easy route by visiting that well too often, with only Better than Saturday Night returning to a Lynott-esque delivery.

Any Hard Rock band worth their salts is going to have an influence from Thin Lizzy – just as any Doom band does Black Sabbath – and the proximity to the Lizzy legacy might mitigate Black Star Riders flying too close to that particular sun. But the band only briefly pay homage, before heading off into fresher fields. 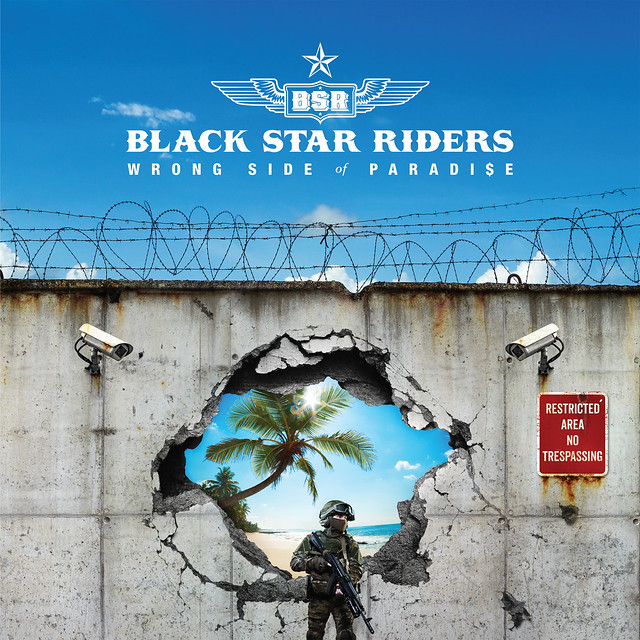 Don’t Let the World (Get in the Way) is dripping with driving rock riffs; the Celtic flavourings of Green and Troubled Land plays like a lament to the historic situation across the Irish Sea, close to Ricky’s heart as he is a Belfast native; and This Life Will Be the Death of Me builds its subtleties around a gentle bassline and bluesy solo.

The idiomatically titled Catch Yourself On finds the band exploring more alternative sounds, all the while maintaining a steady, heart-beat, pulse. Second single, Pay Dirt, is a huge, stadium-filling anthem, full of driving riffs and massive beats that is a certified live classic in-waiting. The refrain of “my heart belongs to Belfast, my soul belongs to Glasgow” will be like lighting the touch papers at the Limelight and SWG3 when Black Star Riders play those cities in February.

Hustle’s whiskey-soaked bar rock – complete with harmonica – and the acoustic hearts of both Riding Out the Storm and Burning Rome sound like that wouldn’t be out of place on one of Ricky’s solo records; while the Black Star-ification of the Osmonds’ Crazy Horses fits right in.

I’ve been a big fan of Ricky Warwick’s work since I caught my first Almighty gig in February 1990, in the foyer of the Preston Guildhall – don’t look for it, it’s not there now. Throughout the time since, Mr Warwick has shown himself to be a consummate songwriter and performer. On Wrong Side of Paradise, he continues that, giving a performance both musically and vocally and further cementing himself as one of his generation’s finest talents.

The current Black Star Riders line-up, completed by Sam Wood, Robbie Crane and Zak St John are on tip-top form throughout the album, so it’s bitter-sweet to hear Sam and Zak’s places will be occupied Scott Gorham and Jimmy DeGrasso on tour next month. Not bad replacements, me thinks!

I know it’s only mid-January, but there’s a very good chance Wrong Side of Paradise could be featuring on many an Album of the Year list come December.