Album Review: Deicide - Once Upon The Cross / Serpents of Light [Boxset]
Reviewed by Dan Barnes

Hot on the heels of the Crucifixiation set released late October, Cherry Red Records unleash Deicide’s third and forth albums and further demonstrate that Mr Benton and company were far more than a Satanic image and an unholy noise. Originally released by Roadrunner Records, these two albums cemented Deicide’s place at Death Metal’s top table.

Arriving three years after Legion, 1995’s Once Upon the Cross saw the band moving away from the sophomore record’s technical flare and returning to the unholy, riotous blasphemy of the debut. By this time, too, the Metal landscape had taken a seismic shift and the experiment of big labels signing Death Metal bands had proven itself to be a spectacular failure.

This was the era of Roots, Demanufacture and Far Beyond Driven yet Deicide weren’t shy about paying lip service to the modern trends in introducing some grooving elements into When Satan Rules His World and They Are the Children of the Underworld.

But Once Upon the Cross is nothing if not a high accomplished Death Metal record and there is no substitute for the Deicide-patented filthy, choppy riffs and the most blasphemous song titles that side of the Atlantic. Christ Denied is fast and furious, Kill the Christians brutal and To Be Dead’s buzzing guitar shows the band’s mastery of their craft.

Controversy attracts controversy and, just for devilment, both the title track and Tricked or Betrayed feature samples from Martin Scorsese’s 1988 film The Last Temptation of Christ that, even seven years later, was still ruffling the feathers of all the right(eous) people.

Once Upon the Cross proved in 1995 that the spirit of Death Metal wasn’t dead and showed Deicide would be a major flag-bearer in its revival. At short of half-an-hour, there is hardly an ounce of fat on this record, which still sounds as good today as it did twenty-eight years ago. 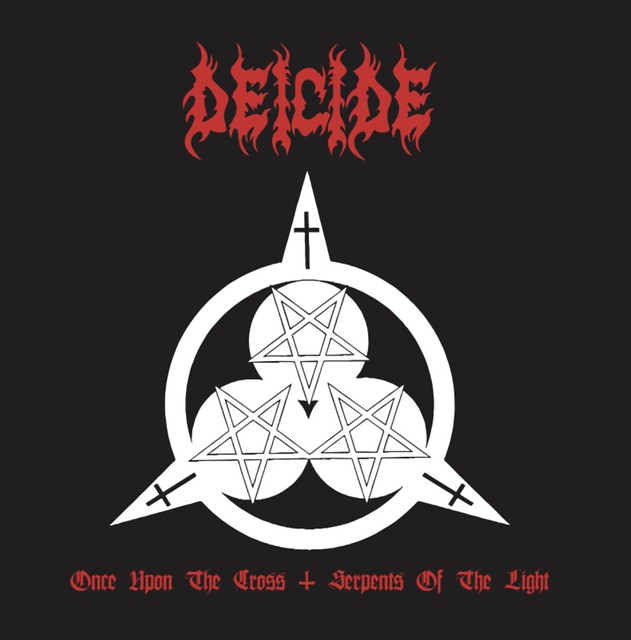 Two years later and, against an ever-more hostile musical environment – this was when Nu Metal was revving itself up to be the biggest musical genre of the time – and Deicide captured lightening in a bottle for the fourth time with Serpents of the Light.

Once again, the band take themselves off in a slightly different direction. As Legion was a foray into the technicalities of Death Metal, so Serpents… is an exploration of what happens with Death meets Thrash. Built on fat riffs and choppy guitar from the Hoffman brothers, album number four dials back the grimy feel of Once Upon the Cross into a more polished – and dare I say – accessible product.

Bastard of Christ comes along with a cleaner and more melodious sound, while Blame It On God’s opening bars would not have sounded out of place on an early Slayer record. The middle of the album goes about its business with a ruthless efficiency, with I Am No One serving up some staccato licks and Slave to the Cross dropping some demonic vocal lines into the chorus.

The closing trio of Believe the Lie, The Truth Above and Father Baker’s is a return to a more straightforward Death style, while still maintaining the air of progression established across the whole of the record.

I’ve always had a particularly soft spot for Serpents of the Light, possibly due to it being overshadowed by its more illustrious predecessors. Yet, in my humble opinion, it is the equal of anything Deicide released before or since.

As a pairing, both Once Upon the Cross and Serpents of the Light represent a band at the height of their creative powers, when the unrest that would go on to plague the band was either not evident

or not existent. Both album’s title tracks, When Satan Rules His World, Bastard of Christ and Blame It On God have all featured heavily in Deicide’s live setlist over the years and still stand as some of the band’s most celebrated Christ-baiting moments.

Cherry Red Records have scored another hit with this package and, looking at the release roster, will close out the trilogy in February with Bible Basher, featuring the last three records put out by Roadrunner. I look forward to having a reason to spin those again but, in the meantime, why not begin this new year with a nostalgia trip?