This week when we arrived at Devil's Island we find one man industrial wrecking crew Fields of Regret sat on the beach. The island is far from his home, so how did he end up here and how did he cope with life on Devil's Island?

By the time I chose which one to take I would probably have drowned… but it would be Antichrist Superstar by MARILYN MANSON. The intro of the album still gives me goosebumps after 20 years. The sound of guitars is fantastic. Lots of variation in vocals and keyboards. Maybe not the best album ever made but it will assure some great moments on the Island. It will also keep dangerous animals away since Manson is the biggest animal on earth.

That’s an easy one. The Last Temptation by ALICE COOPER. That poster hung in my bedroom for decades and I spent hours looking at it. The cover is filled with all different kind of creatures with the head of Cooper hanging over it like a blue shadow. Not his best album but certainly his best artwork.

An exotic Island that means cocktails - lots of them! But since I’m alone on the Island, and I don’t know how to prepare cocktails I probably get numb. So I think I will follow Lemmy’s advice “one bottle of Jack Daniels a day keeps the doctor away”.

My Black Sabbath “War Pigs” t-shirt from their tour in 1997. It shows 2 pigs on it dressed like soldiers that are fighting with machine guns. I sometimes still wear it, although the number of holes in it is uncountable.

Since I want to stay married after this article, I choose my wife! 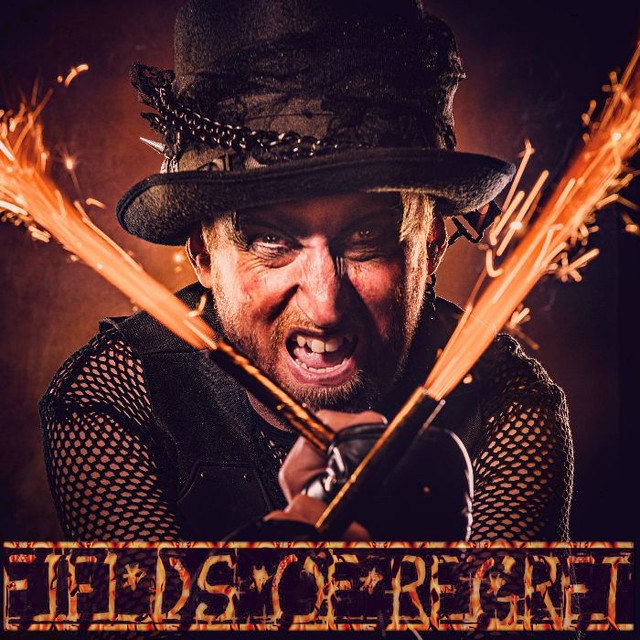 The 30th anniversary concert of RUSH in Holland. It was my first time seeing them and I was blown away by their performance. Since it was their anniversary, they played one track of each of the albums they’d made at that time. The whole show took 3 hours and I enjoyed every second of it.

I would send it to Bruce Dickinson. He has a private jet and loves adventure. I could also send it to the pope, but I don’t think he’s in a metal band.

Since I’m the only band member it’s gonna be weird. I’m gonna have to sacrifice myself to save myself. Think I have to start eating myself… cut off a foot, boil it… I’m starting to get nightmares from doing this interview.

Alice Cooper. I’ve been a devoted fan of his since I was 13, when the song “Poison” was a hit. Saw him 26 times live and know all his albums by heart. When I thought about how I wanted Fields of Regret to sound I certainly wasn’t thinking about Alice. I wanted a deep dark sound, fast rhythms and a Vincent Price voice. But most people who listen to the new EP hear the influence of Alice in it.