One of the flurry of records that are looking to get fans’ attention early on in the new year is Negative Vortex and their first full length record titled Tomb Absolute. In truth, despite the 2015 year of formation, as well as their initial Demo, this is really the rebirth or relaunch of the Negative Vortex name considering how the band have done seemingly absolutely nothing between that aforementioned Demo and Tomb Absolute that we have now. Led primarily by two guys, Tomb Absolute is certainly on the longer side of things but that doesn’t mean it isn’t worth checking out. I was rather curious with what this record may entail, especially when acknowledging the massive gap in releases too.

Usually I wouldn’t be a fan of short introductory pieces, I’d much prefer a band to just throw me straight into the mire of their work but here it works to the band’s advantage; knowing we have a record that’s nearly an hour long, a short piece such as the one that does open this album up comes in handy at quickly immersing us within their atmosphere, giving audiences an idea of what’s to come. In a way it excellently compliments the first couple of tracks the band have in store for you as Negative Vortex hurl visceral soundscapes, nightmarish soloing and vocals that are as gruff as they are loud and powerful. It’s very clear from the outset that Negative Vortex were always looking for something more malicious and razor-sharp, as opposed to death metal’s typical aesthetic where things are streamlined and smoothed out for a more concise listening experience.

That ultimately brings us to the pacing this record exudes. While the band’s intrinsic goal with Tomb Absolute is intensity and proving that macabre immersive experience, their willingness to break the mould and defy convention with what people may quickly come to expect from them is to be commended. Considering we’ve got an album almost an hour long, it makes sense to naturally include songwriting where the pacing is nicely chopped up here and there. Most tracks throw you straight into these swirling vortexes where anything can happen, but like any wild storm you’ll eventually come across the eye of the hurricane; it’s during these sequences where the band’s doom tendencies come through all the greater, slowing the songwriting down and simply allowing us the privilege of breathing. It’s abundantly evident that when the band want to instil speed into their performance, it comes through with zero difficulty; it’s why that periodic break in the tempo is so vital and impacts the songwriting so greatly. Had this been a full on speedfest, our senses would be continuously overwhelmed and thus result in a lesser experience of Tomb Absolute. 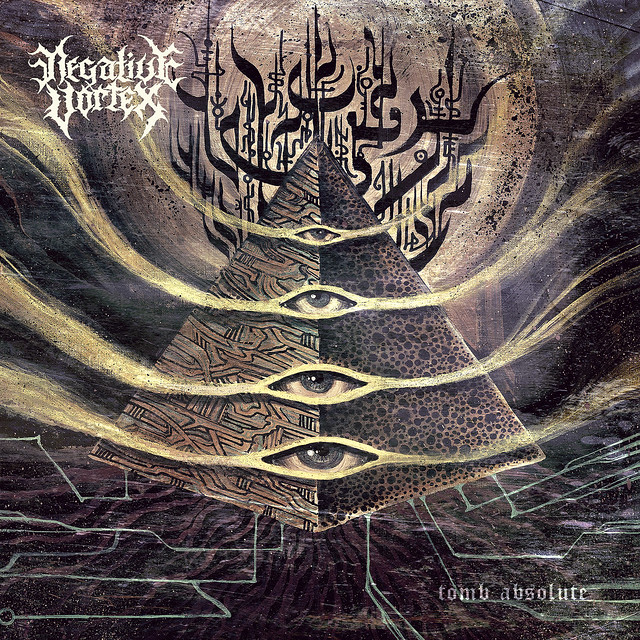 I especially took to how inventive the soloing was throughout my time with Negative Vortex. We’ve covered beforehand how the band employ riffs and songwriting that bolster the band’s chaotic and downright malicious nature, but it’s during the soloing that we really experience the most unrefined and animalistic pieces of their potential. Unlike a great many death metal act, Negative Vortex utilise their guitar solos to maximise the sporadic and spontaneous nature their sound has the potential to provide. Often, a typical extreme metal act will cue their signal to the listener when a solo is about to begin but, through Tomb Absolute the band give us no warning sign as to when the ante is set to be cranked up. There’s no handholding happening here, no prior preparations we can make; just wholesale falling and further into the band’s self-crafted maelstrom.

When we view this album as a piece that’s committed towards that visceral and swirling atmosphere, the vocals are actually rather necessary to create that nice counterbalance that would otherwise result in a record that may feel a little heavy on the slicing and ripping side of things. Utilising vocals that are as gruff as seemingly mundane as they are herein was a good idea I would say, there isn’t anything overtly special about the performance itself nor the style of vocals being employed. But simply by being what they are, the vocals manage to exude a foundation to the record that the guitar work, as seething as it is, doesn’t fully succeed at layering. In this manner, the bass and vocals work in conjunction with one another to be the bedrock of our listening experience.

In conclusion, Tomb Absolute may be almost an hour long and sport tracks in the 6 – 10 minute mark but that doesn’t stop Negative Vortex from making every second count. While I do believe some additional variety could have been injected into the songwriting to make for a more fleshed out experience, on the whole, the band have certainly succeeded at making this record feel realised and worth your time and money. The slower, doom tendencies were a nice discovery and seeing it early on in the album’s running indicates to us that this was never going to be a one-note performance. There’s plenty to keep us invested with that said however, with blistering solos and vocals that keep us rooted to the ground all the while you’ve got the more ripping style of riffs going on around you. A solid entry for January and a good time to be a fan of Negative Vortex for sure.