Amongst the first records to pique my interest for 2023, Dryad’s The Abyssal Plain was one such album I practically threw myself at following its availability for reviewing. Formed in 2017 out of Iowa, United States, the band are a blackened death metal outfit that have seen this album come out through years of effort and commitment. Their first and self-titled EP, followed by The Silurian Age, were each released in the same year as their formation. This was soon followed by a Split between themselves and Acid Leather which was also followed suit by a Compilation. However, three years down the line, Dryad are finally poised to unleash their debut full length material. What will we find inside? Let’s delve in to find out.

After a short introductory piece, the full might of Dryad is laid bare for us to experience. I liked how it doesn’t take long for us to recognise that the vocals aren’t going to the typical kind that we can follow along to. There isn’t a single syllable to be found within that you’ll discover or decipher to follow or become invested in. The overall aim of the vocals herein is to provide that harrowing, visceral soundscape that can only further the audience’s attention and immersion into this darkened world the band are crafting for us. We also need to remember that tracks here aren’t all that long, the band throw a good and quick succession of tracks our way and the speed at which the vocals are performed complement the pace at which their songwriting works at too. Before you know it( you’ve finished all track and the band are already prepping you for the next.

I appreciate how Dryad don’t just play fast with a blackened fervour and then call it a day; throughout the record the band inject numerous swathes of nightmarish atmosphere into their performance, thereby giving this record the sense of falling deeper into some macabre horror. A track like “Brine Pool Aberration” has several moments where the riffs don’t just possess a rapid and flowing ambience, there’s a legitimately swirling or falling aspect to their sound that elevates their songwriting from blackened death metal to something that’s much more immersive and horrific than their other contemporaries may otherwise be purporting. In this perspective, The Abyssal Plain is a much more frightening record than other extreme metal acts have been to crank out, purely because of Dryad’s focus on providing something more than rudimentary riffs and some superficial attempt at evil. 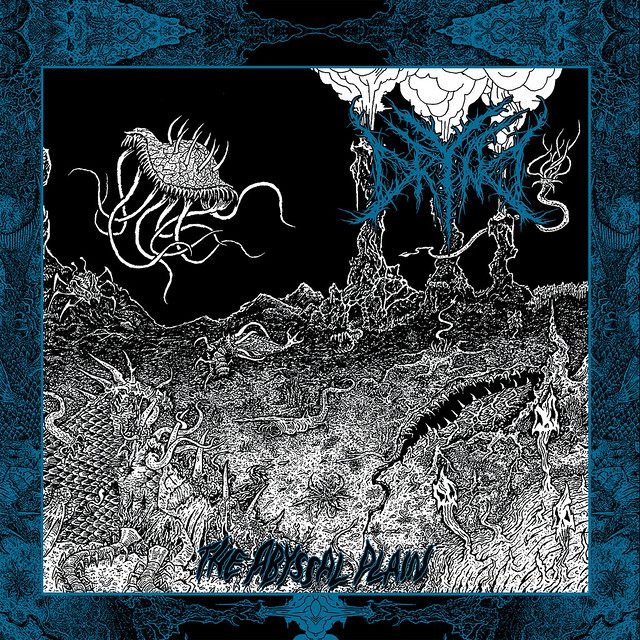 Yet, in spite of the band’s inherent concentration on a dissonant, chaotic blackened death metal assault that is clearly playing regardless of what direction we may wish to head in, it’s amazing how clear and refined the guitar can actually be when the band deem it necessary. It isn’t often and it’s only found within a few, select instances but the soloing is surprisingly clear and gives you perhaps the best window into what the band can also be capable of aside from the overtly residing wall of madness Dryad are otherwise comfortably at home with. These moments of levity aren’t often, sprinkled throughout the record seldomly, but they provide a keen insight into what Dryad consider to be diversity within their record that is otherwise, at face value, initially one-note.

It’s striking how the drumming can come off as simultaneously rampant, chaotic and immensely structured at the same time. Upon initial listens, the drums may seem to have very little order going on throughout the songwriting, being merely the senseless blast beat affair May may be expecting  this to be. Quite frankly, this album can appear to be a sheer blast beat marathon owing to the songwriting and composition that this record does suggest itself to demonstrate but, as we delve further into this album, it becomes increasingly clear that the drums are being tightly controlled and delivering the devastation that is required of the songwriting at that particular moment. The cymbals crash away with zero regard to how well receive them, resonating right to the far recesses of this record’s soundscape and when blast beats are utilised, they end up complementing the vocals by being this sonorous and destructive force. But then the drums can be quickly brought into line alongside the rest of the songwriting, thereby bringing the drums into a new light. In a way it speaks volumes about the record as a whole; The Abyssal Plain may seem like some superfluous flurry at first but it’s actually quite the planned and organised vortex.

In conclusion, The Abyssal Plain is the blackened death metal equivalent of slowly realising one of your favourite paintings, that you’ve often thought was nonsensical and completely haphazard in its design, was in fact exquisitely composed and pieces together to create the picture the artist always had in mind. What might immediately seem like total anarchy is actually meticulously planned and then performed death metal; it’s only by listening to the record further into its deplorable caverns and aesthetic that we fully realise the deliberate nature of Dryad’s songwriting. Riffs and atmospheric samples only add to the band’s abyssal intonations so when the instrumentation kicks in, the impact is much more visceral and total than of Dryad had merely downtuned everything with crushing ambience. The record feels like a dream you can’t escape from; one that only darkens the more you’re subjected to it’s chimes and evils. On the whole, I got more out of this record than I was actually anticipating and therefore, Dryad are certainly a band to keep an eye on. Thoroughly enjoyable and quite the quick listen.