Formed in Los Angeles in 1978, Dokken were perhaps less well known than some of their contemporaries, being mentioned in the same breaths as many of the Eighties Strip alumni who would go on to global success and huge record sales.

Although still a viable act I think it’s fair to Dokken’s glory years were up to their first separation in 1989. And, through multiple comebacks, the band have issued a further seven records between 1995’s Dysfunctional and Broken Bones in 2012, it’s the first four – the classic quartet, if you will – for which Dokken will be best remembered.

Disc One is the band’s debut album, Breaking the Chains, which introduced the world to the voice of Don Dokken and the virtuoso guitar-work of George Lynch. Though only being released on Elektra in 1983 in the US, this record had been available in Europe two years earlier, having been put out by French label, Carrere Records in 1981. The 1983 version featured nine of the original’s songs, albeit with a different running order, with the driving Live to Rock (Rock to Live) taking We’re Illegal’s place and adding a full-bloodied live version of Paris is Burning to replace the studio track.

Breaking the Chains is generally a collection of mainly radio-friendly rockers and should be seen as a precursor to what the band had to offer. In the Middle. Felony and Seven Thunders all seem to be pitched toward the less aggressive end of the market; Young Girls also sits here but has something of a problematic subject matter.

Balancing this up is the pumping rock I Can’t See You, Nightrider and Stick to Your Guns. It’s really only the title song, and only US single from this album, that would mark Dokken as a band to stand out from the mass of lookalike/ soundalike bands emerging from LA at that time.

Despite the rather thin production, Breaking the Chains, suggested more from this collective and they would have the opportunity to meet those expectations a year later.

Disc Two sees the band’s only line-up change of this era, with Juan leaving to join Ratt, and being replaced by future McAuley Schenker Group, Foreigner and Dio bassist, Jeff Pilson for the sophomore release, Tooth and Nail in 1984.

The three singles drawn from this album. Into the Fire, Just Got Lucky and the ballad, Alone Again, showed Dokken had grown as songwriters. While there isn’t a huge variation from Breaking the Chains, the execution shows a better command of their creativity.

The addition of Jeff Pilson seems to have imbued both George Lynch and Mike Brown with a renewed vigour as, from the outset, they deliver a more dynamic attack. Coupled with a fatter production, Tooth and Nail sees Dokken becoming the band they should be.

Ropey album art aside, this record is a collection of raging bangers, like the title track, Don’t Close Your Eyes and Turn on the Action; mid-paced rockers Heartless Heart and Bullets to Spare and those all-important and chart-botherers, Heaven Comes Down and the afore mentioned Alone Again.

Tooth and Nail charted at number 49 on the US Billboard 200 and went on to be certified Platinum with sales exceeding one-million. In the wake of the record, Dokken would even find themselves as the opening act for the likes of Y&T, Twisted Sister, Dio and Kiss.

Under Lock and Key followed in 1985 and is Disc Three of this collection. Coming out in the same year as 7800 Degrees Fahrenheit, Theatre of Pain and Invasion of Your Privacy, Dokken were going toe-to-toe with established acts, plus the unmasked Kiss hit the shelves with Asylum. 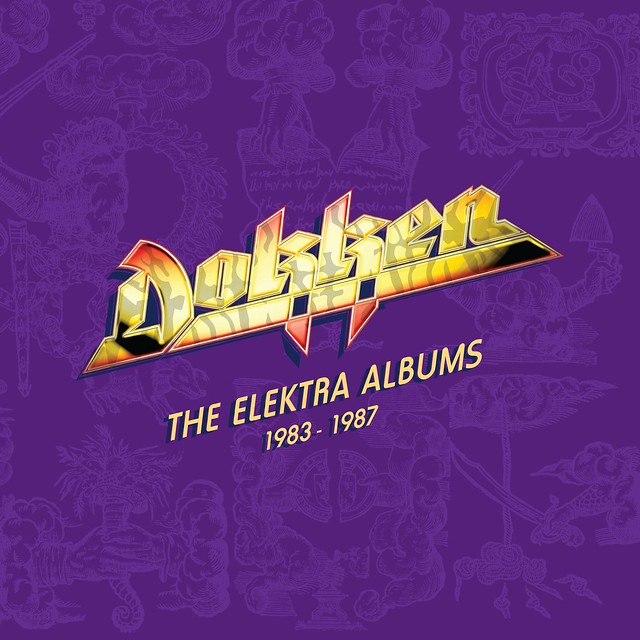 Both US singles breached the Billboard Top 30 in 1985, the familiar In My Dreams and the chunky riffing of It’s Not Love didn’t stray to far from the tried and trusted formula. The Hunter found some success in Japan, Will the Sun Rise? and Lightning Strikes Again are more of those mid-tempo rockers that appeared to come so easily to the band.

Of course, there’s the ballads, Slippin’ Away and Jaded Heart, which are custom-built to pull on those heart strings. The opening track, Unchain the Night, tells you all you need to know about Under Lock and Key and is a fair metric as to whether you should spend the next forty-minutes in its company. I’d say you should, by the way.

The final Disc, Four, is the band’s magnum opus, Back For the Attack from 1987. Such is the success of the band by this point that they were invited to contribute a track to the then latest Nightmare on Elm Street film, Dream Warriors. This included a promotional video featuring Patricia Arquette and Freddy himself, Robert Englund. The success of the Elm Street movie introduced Dokken to a whole new audience, with Back For the Attack shifting units in Canada, here in the UK, Switzerland and across Scandinavia.

Substantially longer than its predecessors, the new record is Dokken’s defining statement. Peerless performances from all involved, with Don even loosening the reigns enough to give Lynch, Pilson and Brown the instrumental, Mr Scary, Back For the Attack rarely feels weighed down by its hour-plus runtime.

The driving rockers are here, in the form of Kiss of Death, Night by Night and Cry of the Gypsy; those mid-tempo numbers: Standing in the Shadows, Stop Fighting Love and Lost Behind the Wall; and, naturally, the ballads: Heaven Sent and So Many Tears.

From a personal point of view, Back For the Attack is one of the seminal Eighties genre albums, up there with Girls, Girls, Girls, Slippery When Wet and Whitesnake’s 1987 record. I’ll admit there is a tendency to nostalgia when listening to this one again but, on balance, it still provokes the reaction a great rock record should.

The success of Back for the Attack and the general momentum Dokken built throughout the decade saw them on the US touring bill for the Monsters of Rock shows with Van Halen, Scorpions, Metallica and openers Kingdom Come. Sadly, in the early spring of 1989, creative differences meant Lynch and Brown would depart, forming Lynch Mob; Pilson would dabble with a couple of solo projects before joining Rob McAuley and Michael Schenker, and Don would work on solo records.

Various reformations and reunions would occur over time, but the lightning captured in the bottle of the Eighties was never repeated. I still have my Elektra copies of Tooth and Nail and Back For the Attack – an of the excellent live album, Unleashed in the East which, in hindsight, acts as a neat bookend to the Dokken success story.