One of the biggest metal tours on these shores since Covid is deservedly opened by local-ish heroes Malevolence, flying seriously high since the release of ‘Malicious Intent’, which is threatening to send them stratospheric. After putting on my favourite show of 2022 at Bloodstock in August - which I know a few of the writers over here would agree with - they’ve firmly established myself in my own eyes as an essential live band for heavy music in the UK, though plenty of attendees here would have been saying the same for years. And as the clock wavers towards 7pm, it feels that Malevolence have assuredly pulled their weight in terms of audience share tonight, the centre of the Academy filling out with Malevolence merchandise before the first notes of ‘Malicious Intent’ ring out. Already their most recent album feels like a set of modern-day anthems, backed up with heaps of melody, groove, shout- and sing-along moments, and power. Their older material still rouses a huge reaction, though - the floor completely opens up, led by the expert orchestration by frontman Alex Taylor, for possibly the biggest, widest and wildest moshpit I’ve ever seen in the Academy over ‘Self Supremacy’, stretching from about three rows at the front to three rows from the sound desk. The energy in the room is simply awe-inspiring. ‘Keep Your Distance’ is another older track that ignites a lot of fire from tonight’s crowd.

Still, it’s a proper, well-structured set, with power ballad ‘Higher Place’ around the halfway mark seeing a sea of cigarette lighters and phone torches amid a massive singalong - again, led by Alex Taylor’s enviable command of the crowd. They’re a great presence, with drummer Charlie Thorpe unafraid to stand up and egg on the crowd when he can - and playing the drum intro to ‘Pull Harder’ with impressive accuracy when the band voice their appreciation of Trivium for bringing them out. The three stringed players also leap around the stage, and bring a sense of fun with them while keeping everything locked in with technicality and tightness. The guitar solos are on point and the backing vocals are confident behind Alex’s lead vocal presence. By the time ‘On Broken Glass’ fades out, following yet another crowd singalong and a frenetic moshpit, Malevolence leave with the impression that they’ll be headlining these sorts of venues in a matter of years. I’m not usually crazy about hardcore - though they’re much more than this - however, this is possibly one of the best opening sets I’ve seen. 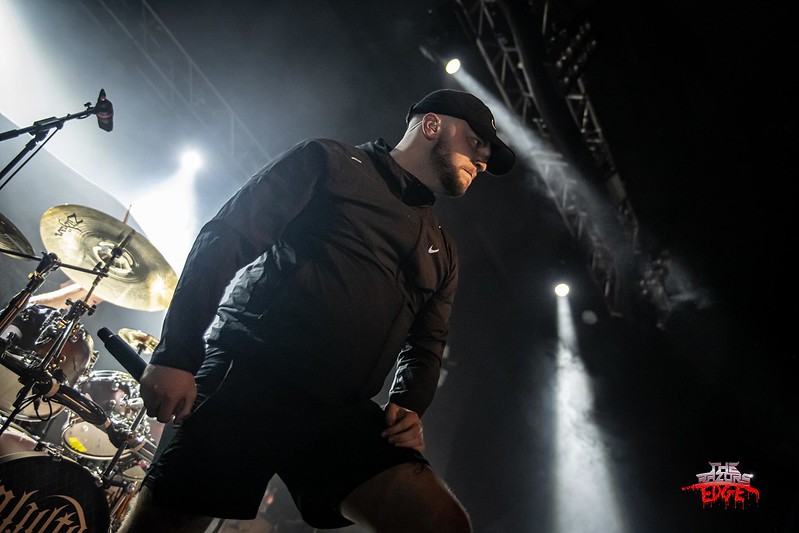 Heaven Shall Burn have been around for longer than any of the other bands here. It’s peculiar, really, that they can headline Wacken in their native Germany, yet sub-headline Academy-sized gigs in the UK. And though they bring a clear, vocal faithful with them to the front of the standing section, the room feels a little emptier around the flanks when they’re on. It’s true that they’re bigger in Europe, but a lot in the room feel less exposed to Heaven Shall Burn, which given their steady, hardworking ethos and consistent stream of quality old-school metalcore records, is unfortunate. However, for those with an open mind and an open ear, they put their best foot forward and show off a solid display of uplifting metal musicianship and showmanship for around an hour. For those who are already well-acquainted with Heaven Shall Burn, it’s a great opportunity to hear a wide selection of their biggest and best-loved numbers from all chapters of their career.

Striding on with ‘My Heart and the Ocean’, from 2020’s ‘Of Truth and Sacrifice’ - their first album to debut at Number One in Germany - its epic intro, chant-along hooks and pit-friendly riffs get the crowd going straight away. With pounding double bass and Gothenburg-style melodies, they’re a fun presence, and their fans reflect this back with energetic pitting and faithful screamalongs. They sound razor-sharp after so many years of doing this at the forefront of heavy music, and the influence that they have had upon later metalcore giants bleeds through their songs. The frontman utilises a few interesting techniques to engage the crowd, some really effective, although some others are a little jarring. The guitars sound a little muddy at times, as well. Still, their set has plenty of highlights, drawing from most of their backlog of studio albums, with an Edge of Sanity cover thrown in towards the end that goes down an absolute storm. Closing with the classic ‘Endzeit’, they end the set triumphantly and to rousing cheers, but you can’t escape the fact that they feel like the lesser of the three bands tonight, so incredibly strong and well-supported are the two that they are sandwiched between. 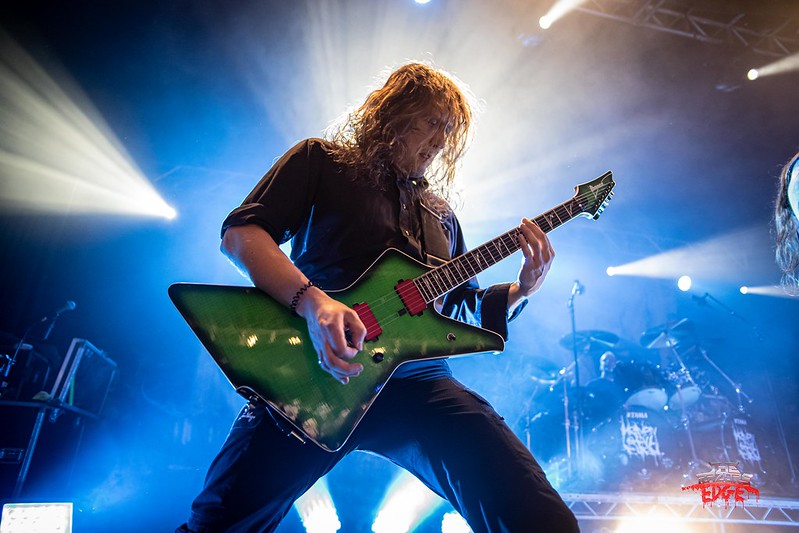 The curtain’s up for Trivium before the set, and though the crowd felt dominated by the Malevolence die-hards whilst they performed, Trivium’s enthusiasts make themselves known as ‘Run to the Hills’ plays over the speakers, as has been Trivium’s pre-show ritual for just under a decade now. Trivium have kept a steady stream of fans in the UK over the past two decades, and steadily marched on and grown after their initial explosion. Heafy et al choose to pay tribute to the old-school UK devotees, amongst whom their 2005 record ‘Ascendancy’ caused such an important stir for the band, by opening up the set with ‘The End of Everything’, ‘Rain’, and ‘Light Light To The Flies’. The reaction is one of pure electricity - with the pit faithful singing along to the lead guitar lines in ‘Rain’, and Matt and Paolo not even needing to perform vocals to the ‘Flies’ choruses, so loud are the crowd tonight, starved of their Trivium fix after nothing since Download 2019 and Covid-related tour postponements.

Matt Heafy looks the part, wearing a gold dragon jacket for the first few tracks, before sporting an old-school ‘Take Their F*cking Heads’ tank top for the rest of the set. Not, of course, that Trivium entirely play an old-school set tonight - ‘Like a Sword over Damocles’ from 2021’s ‘In The Court of the Dragon’ is an undisputed set highlight, and the debut of ‘A Crisis of Revelation’ on these shores sends the audience into unbridled mania. The last couple of albums are so strong that you’d arguably take a few more new tracks over the often-played ‘Down From the Sky’ or ‘Strife’ - though that doesn’t stop Matt having to stop either song for potential crowd injuries. No one’s really complaining too much in the moment. A treat for Trivium and Malevolence fans alike sees Malev shredder Josh Baines join Trivium for a performance of ‘The Deceived’, and indeed, Trivium show their delight to have both bands in their support tonight. Matt heralds Malevolence as one of the heaviest bands in the world, and Heaven Shall Burn as an outfit that he’s liked since he was 16; incidentally, today’s the same day that Trivium’s cover of HSB classic ‘Implore The Darken Sky’ drops. Matt’s open celebration of his old-school influences as well as his championing of newer bands is really quite admirable. 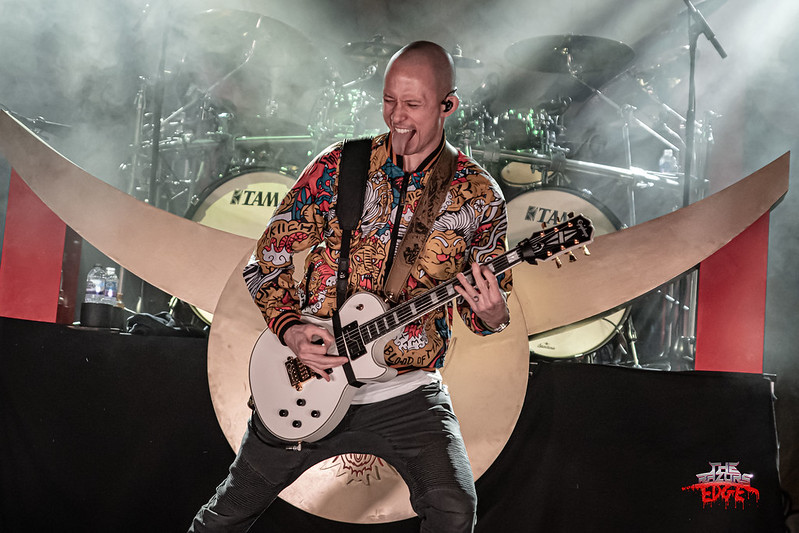 The crowd match Trivium’s unparalleled stage presence with an almost endless stream of crowdsurfers, and a moshpit taking permanent residence at front and centre. Matt entices the crowd well, knowing how to get the best energy out of everyone, comparing them to the night before to have them boo and roar in all the right places. It seems unfair to have only mentioned Heafy so far. Alex Bent was the missing ingredient in Trivium for so long, adding tasteful yet impressive drum fills into their classic numbers, Corey Beaulieu is at the top of his game with precise and flashy lead guitar playing, and Paolo is full of energy and movement with equally dazzling bass work in tow. The latter two also contribute confident backing vocals, which have come on leaps and bounds over the years, moving across the stage and using different microphones, putting on a true performance. Trivium are, by now, an immovable live unit whose stagemanship appears effortless. 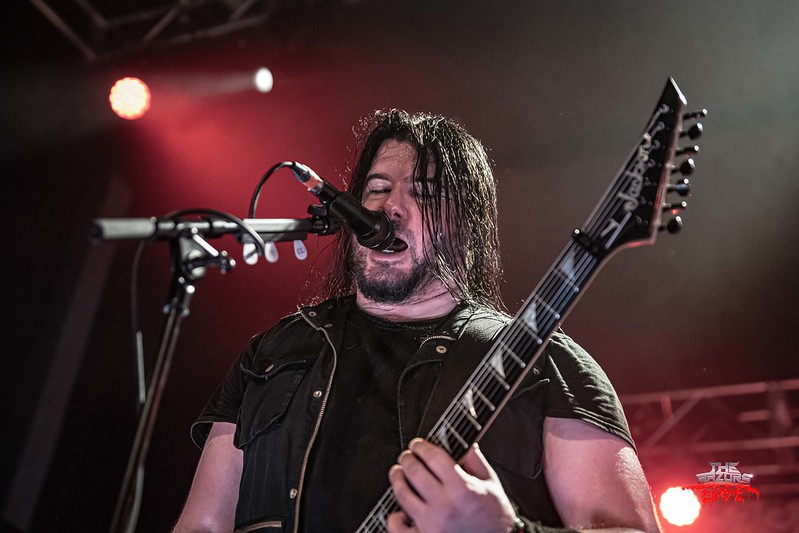 Trivium burst into the legendary 12-minute ‘Shogun’ without warning towards the end, rousing one of the biggest singalongs of the night. They’ve been busting out more of the deeper fan favourites since the pandemic, and the thrashy stylings, huge choruses and shifting moods in ‘Shogun’ make it one of the band’s most deeply revered tracks. ‘To The Rats’ also gets a rare runout, unplayed since 2010 before Covid. Still, it would be a somewhat empty Trivium setlist without ‘In Waves’ or ‘Pull Harder on the Strings of Your Martyr’, two of their biggest hits, which round out the night and see their fans reach boiling point. They’re great examples of how Trivium combine melody, aggression, vocal hooks and technical virtuosity into a melting pot of great songwriting, and all of this proves exactly why they are so high up the metal ladder. Already the band are hinting at a return to the UK and its smaller cities on social media, and if it’s anything like tonight’s metal masterclass, we’re in for a serious treat as a nation. Could they headline Bloodstock again next year? Hats off and horns up to Trivium for a thoroughly convincing, enjoyable, engaging and professional set. 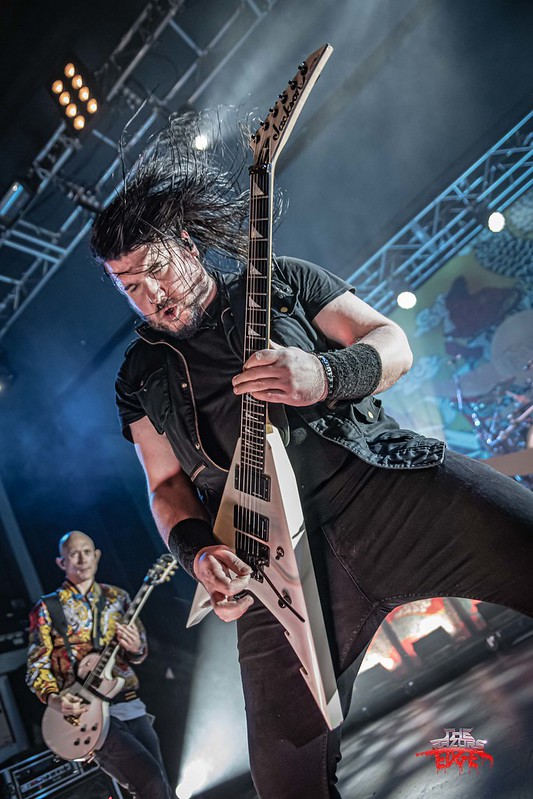 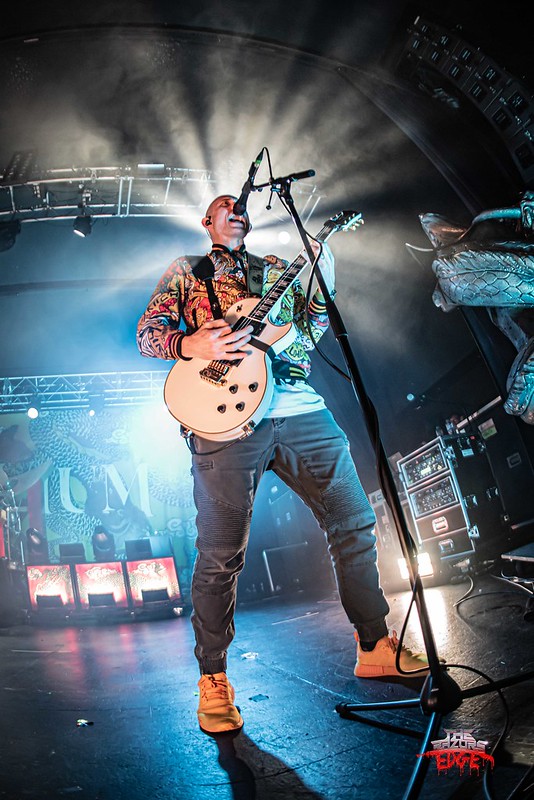 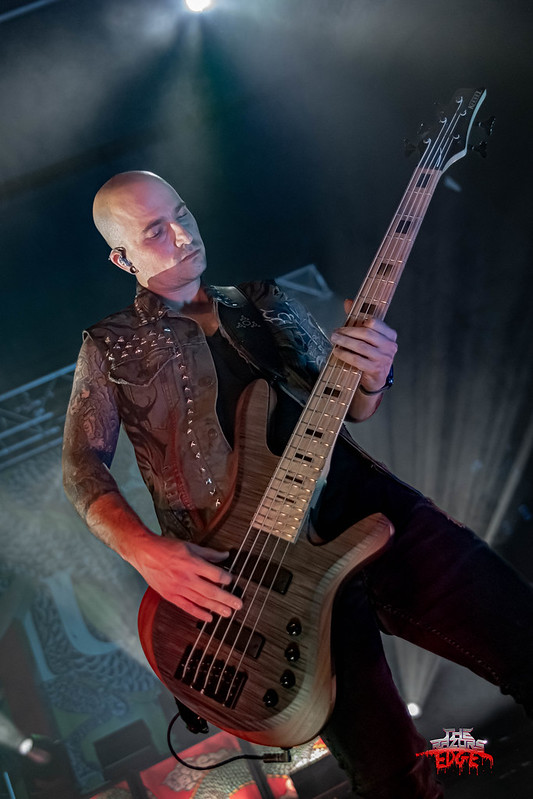 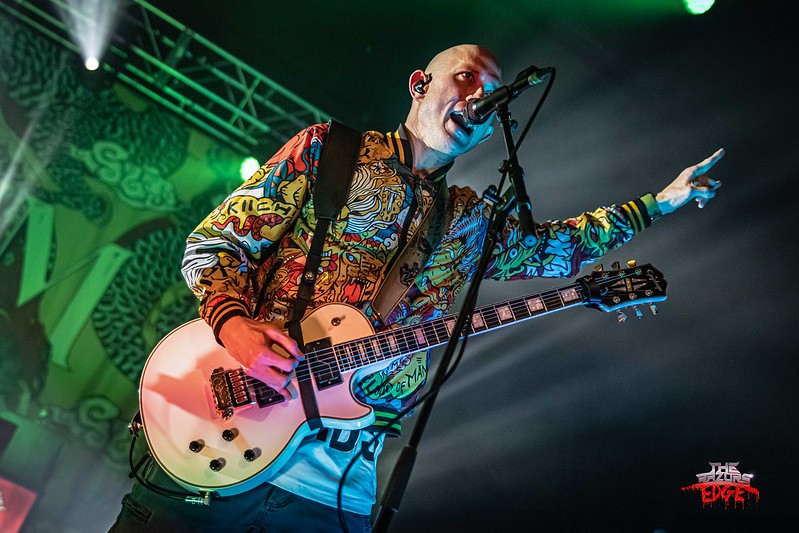 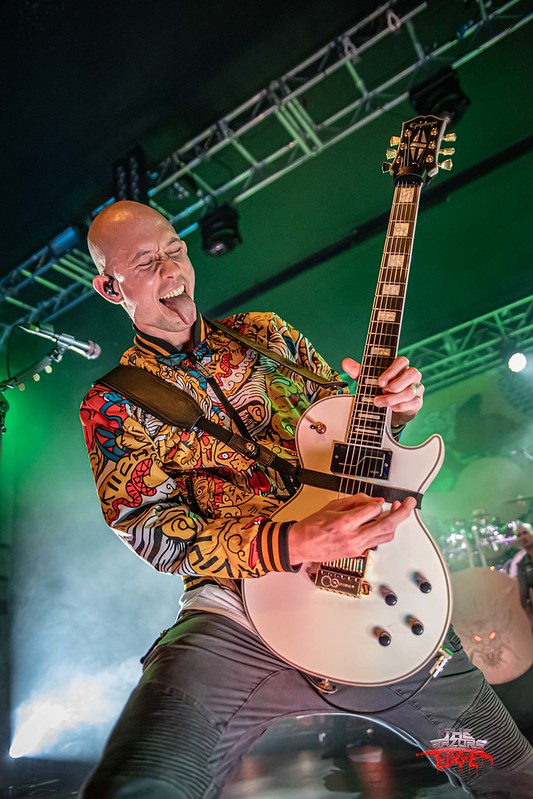 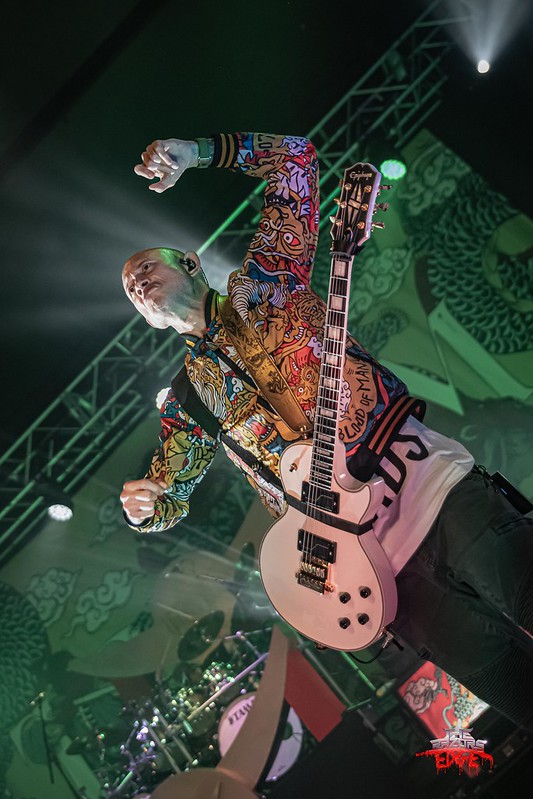 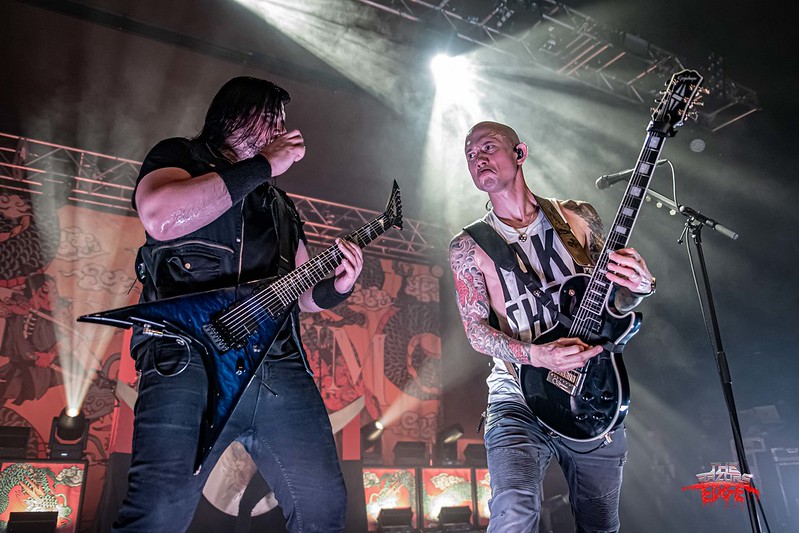