Black Metal is one of extreme music's sub genres where atmosphere created by the music is at times as important as the very music itself. Creating technically excellent black metal is all well and good but without an emotional undercurrent that pulls the listener in and then provokes a feeling, no matter how good the music, it would feel as though something was missing. There is no danger of this happening on '11' the latest album from West Midlands (UK) black metal band Suffering.  They have created a work of art that not only has all the elements a good black metal album should feature but have delivered it with their own very unique individual style.

A menacing slow cymbal intro opens the album on 'Shanshu', creating an uneasy anticipation of what is to follow and then before you realise it, a huge slick blackened death riff comes along, knocks you sideways and sucks you into a desperate menacing black metal nightmare. There's no let up until track 3 and one of the many highlights off the album, 'Diary of a Street Walker'. The soulful solitary guitar paints a picture of the title, a bleak picture at that. The raspy vocals erupt and a repetitive doomy riff adds to the eerie, unnerving feel. Slowly an unexpected but not out of place warm bluesy almost psychedelic guitar solo comes to the fore. You think this song shouldn't work, but it does. It has space, time and a very distinct character. 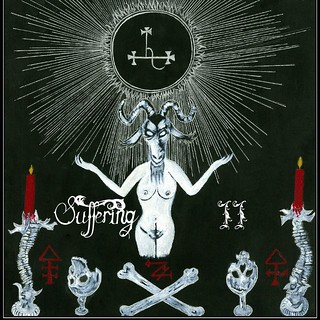 A particular strength of the album lies in the slower less chaotic sections where there is more room. This allows the atmosphere to come through within these simpler, less congested parts where ironically you can appreciate more of the music. This is where Suffering excel.

'Conjuration Through Black Thorns' delicately begins with a soft guitar intro making way for an invigorating riff and the bass which cleverly bounces around in the background, subtly but just as integral as all the rest of the instruments. Clever little features occur throughout the album that you enjoyably only pick up on after a few listens.

'11' is not your typical black metal album and it's not an easy listen. However, from multiple listens, it certainly gives the listener so much more. Clever time changes and subtle shifts in atmosphere become apparent.  It does also have enough to keep old schoolers interested whilst appealing to those wanting a bit more of a dare I say progressive feel to their metal. Obviously drums are integral to any metal album but by accident or planning the drums sit very nicely in the mix rather than out front, allowing the guitar and hefty riffs to stand out. The raspy shrieking vocals, which do work well, can at times be too prominent but the tortuous nature of them only adds to the harrowing feeling of despair that seems to feature throughout '11'. The meaty production almost akin to death metal at times enhances the ferocious sections but equally the quieter, simpler moments do hint at a band comfortable with their style and direction.

'Rebirth Through Cursed Dirt' is an epic 15 min closer to the album. An immersive song where at times the vocals almost become an extra instrument. The song develops within the song via bleak  tremolo driven voyages and nightmarish soundscapes.  The positive guitar tone shines through , making way for the crash of the slow cymbal echoing the beginning of the album. Bizarrely the end has an  almost (certainly not intentional) hopeful feeling of closure to a very individual and inspiring album.

11 is available now on all good streaming platforms.