'Angel Witch' by Angel Witch. One of the first albums I bought as a teen at the start of my metal journey. It brings back memories of listening to Tommy Vance on the Friday Night Rock Show, hearing a song that blows you away, then down to Our Price the next day to buy the record. The title track was one of these for me. The album had been out for a few years by the time of buying (released 1980) but it was a memorable listen (and still is) with is mix of driving NWOBHM rhythms that went on to influence thrash, combined with some slower, doom-ladened riffs influenced themselves by Black Sabbath.

Fast forward the best part of four decades and 2019 brings us 'Angel of Light'. Too many lineup changes to mention have plagued Angel Witch and prevented consistency. Ever present original vocalist/guitarist Kevin Heybourne is the driving force behind the band through the years and their recent revival.

2011 saw the release of their 4th studio album, 'As Above, So Below' which showed there was life in the band, but Angel of Light is classic metal at its best. In many ways it mirrors the format of the first album, starting and ending with the faster, thrashy songs before succumbing to pressure and descending into some great doomy depths in the middle. 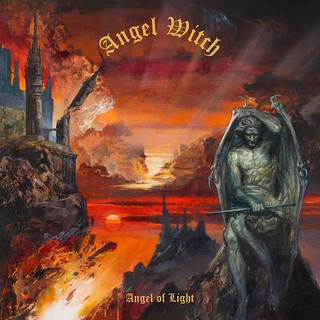 The first 2 tracks, 'Don't Turn Your Back' and 'Death From Andromeda' could sit nicely on any classic NWOBHM album and not feel out of place. From the off, the production feels purposely classic. It sounds amazing with the bass and drums perfectly complementing the twin guitars and Heybourne's voice, which hasn't changed much at all over the years. Octave drops, layered twin guitars, a chorus you start singing without realising - all present and correct. Lovely!

'We Are Damned' starts as before for the first 3 and a half minutes before the last 2 minutes go to an instrumental section which slows the pace and takes the listener down gradually towards the doomy 'Middle of the Album'. 'The Night Is Calling' has a classic doom feel, dripping in atmosphere and haunting, tortured vocals. Comparisons to Candlemass are definitely in order here as the song meanders mournfully towards a faster, menacing end. 'Condemned' has a faster tempo but the despair is still there, both in the vocals and accompanying parts.

'Window of Despair' continues the mid-tempo gloom but towards the end starts to pick up the pace and hint a rise back towards the light. 'I Am Infamy' builds and builds before chugging alone in a more positive manner, providing the albums most memorable solo. Title track 'Angel of Light' ends proceedings and showcases all of the albums elements with acoustic opening and closing sections bookending elements of classic NWOBHM and doom in its almost 7 minutes.

Kevin Heybourne has assembled a fine band to represent the legacy of Angel Witch. He is joined by Jimmy Martin on guitar, Fredrik Jansson on drums and Will Palmer on bass, the only other member who appeared on 'As Above, So Below'.

The production is excellent and leans towards the nostalgic while clearly using modern techniques to ensure it sounds grand. throughout. Justice is done to all the styles used here - classic, thrashy, doom, stoner - by producer James Atkinson (Gentlemen's Pistols/Vorhees).

Traditional metal fans rejoice as Angel Witch return with a fantastic slab that will sit well in your collection next to their eponymous debut.