Mention the word Nile to your average person in the street, and it would probably conjure up stereotypical images of Ancient Egypt with the iconic river meandering its way through the sands and dunes, with massive pyramids and statues standing impressively along its palm tree lined banks. Mention Nile to a death metal fan, and those same images would still spring to mind, but this time with the inclusion of brutal technical Death metal of the highest order.

“Black Seeds of Vengeance” was my first taste of Nile, and what an introduction. I was blown away with the speed and brutality on offer, and a level of musicianship which was quite frankly mind-blowing. “In Their Darkened Shrines” was even more impressive, as was “Annihilation of the Wicked”, with better production and every increasing levels of complexity and over the top speed and heaviness, coupled with experimental instrumentals, interludes and intros using traditional Egyptian instruments.

Since “Annihilation…” though, the band seems to have struggled to top those three seminal records. Don’t get me wrong the four that have come since (Ithyphallic, Those Whom the Gods Detest, At the Gate of Sethu & What Should Not Be Unearthed) are all brilliant death metal albums, they just seem to have that sensation of a band treading water, and even trying too hard to better themselves but coming up slightly short. 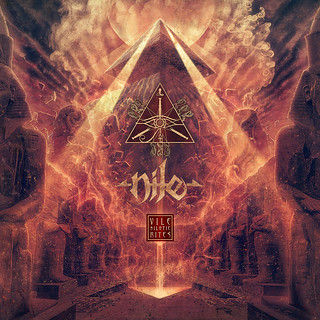 I approached “Vile Nilotic Rites” like I approach most albums, I gave it several listens and then I left it for several days and let my sub-conscious process and digest it. There is no way the human brain can take in and get to grips with music this intricate in one or two listens. This certainly isn’t easy listening. It requires both patience and effort from the listener, but that effort is reward in itself, and after going back to “Vile Nilotic Rites” I can inform you this is the most vital Nile release since “Annihilation…”, maybe even further back.

The production is magnificent, with every instrument clear and separated in the mix, you can even make out the bass, usually an element sadly conspicuous due to its absence on Nile recordings. It’s also important to note that since “What Should Not..” the band has gone through several line-up changes, the most obvious and potentially damaging of these was the loss of Guitarist/Vocalist/songwriter Dallas Toler-Wade, fear not, his replacement(s) Brad Parris (bass/vocals) and Brian Kingsland (guitar/vocals) have more than filled his considerable shoes.

The songs themselves are just as impressive as the sound, I’ve not heard some of these elements since their debut “Amongst the Catacombs of Nephren-Ka”. First track “Long Shadows of Dread” hits you like the wrath of Osiris, “'Oxford Handbook Of Savage Genocidal Warfare” and the title track follow with equal amounts of speed and brutality, but each with its own identity. “Seven Horns of War” is the first epic, but it differs from previous Nile epics with it’s almost theatre like sense of the grandiose, with an accompanying soundtrack that reminded me of the battle scenes from Peter Jackson’s ‘Lord of the Rings’ trilogy, it is truly astounding in its scale.

Other highlights (there’s many and no low points) are the chunky sections of “That Which is Forbidden” and “Revel in their Suffering” the later with its angelic background chanting and almost catchy chorus and melodies, the former with its note bending Phrygian scale slow groove. The most complex piece here is also the longest and involves the most persistence from the listener, it has many, many parts and changes, but like every other track, there’s a feeling of economy, like every riff and phrase has been carefully chosen to fit the complete song structure, no more or less than needed has been used.

One thing I have missed from my review copy, (and why I’m looking forward to my own physical version) is sitting down with the inlay booklet and slowly digesting the lyrics and accompanying essay like notes (present on every album since “Seeds..”, except, and sorely missed, on “Ithyphallic”) from main man Karl Sanders, which adds both depth and context to the subject matter and song writing process, no other band puts as much effort into informing their fans, and turns the whole, into much more than ‘putting on an album’ to a complete listening experience.

In conclusion this is probably the best technical death metal album I have listened to for almost a decade. A stunning and exceptional return.