Slaughter In The Vatican. An evocative title for the 1990 debut album from New Orleans groove-thrash pioneers Exhorder. And what a debut. 8 tracks of fast, melodic, chugging brutality that defined the NOLA metal sound. Exhorder however were short-lived, releasing a second, less thrashy album The Law in 1992 before splitting in 1994. A reunion between 2008 and 2011 lead to promises of new material and a few gigs but not much more.

In 2017 the hiatus ended with original vocalist, Kyle Thomas, and guitarist Vinnie LaBella being joined by Marzi Montazeri (guitar), Jason Viebrooks (bass) and Sasha Horn (drums). Their first ever UK gig at Bloodstock in 2018 was stunning with a full Sophie Lancaster Stage being treated to one of the highlights of the festival. The excellent 3rd album Mourn The Southern Skies was released in September 2019

So at the Underworld in Camden on a Monday night, Exhorder played their second UK gig this time in the iconic London venue. And it was a belter.

Support was from London death/thrashers The Bleeding who put on a good show despite being hampered by poor sound which is unusual for shows at the Underworld. The four piece were strong but during solos, the lack of second guitar really came to the fore as the bass was barely audible although that may have been down to the sound issues.

Fortunately, Exhorder were not affected by any sound issues. 'The Payback' by James Brown was greeted enthusiastically by the large crowd as the band took the stage. What followed was my gig of the year (so far). To hear songs from 'Slaughter In The Vatican' in a small club venue live was amazing, having lived with these songs for over two decades on record and CD.

Opening with the savagely fast 'Homicide' immediately gets the crowd going before the heavy grooves of 'The Law's Unforgiven' kick in. 'Legions of Death' with its menacing verses being properly spat out by Kyle Thomas. This is clearly a band who enjoy playing live and they really owned the (small) stage at the Underworld. 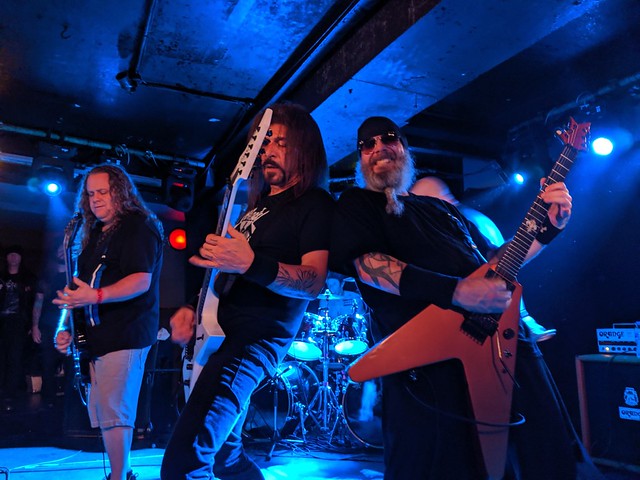 Next up the first new song, 'My Time', which was the first single from 'Mourn The Southern Skies'. This was very popular with the crowd, many of whom have had this on their Spotify playlist for a while. The second (and last) original song from 'The Law' follows and slows things down while bringing the heavy. 'Death In Vain', 'Exhorder' and 'Slaughter In The Vatican' fill out the thrashy middle of the set.

There can only be one song for the encore. The band returns to the stage and the slow, menacing opening of 'Desecrator' is greeted by a massive roar from the crowd. They know what's coming! The song builds as Thomas hurls the lyrics out with extra bile and vitriol. Tempo changes. Faster, slower always heavy.

That's how to end a show. The band show their appreciation to the crowd who reciprocate as they know they have seen something special tonight.

Since their return, Exhorder have produced an excellent thrash album and have made themselves into a tight, mean and amazing live band. Great performances all around and a night to remember.