If the idea of a band wearing heavily robed costumes and keeping their identity behind a veil of secrecy smacks of gimmickry to you then just one small glance at Deathwhite may be all they are going to get of your attentions. However, whilst Deathwhite are that band you may see as using a gimmick with that image it seems the insistence on anonymity is more about allowing the strength of their music to convey their message. So if you do have those preconceived notions about bands using costumes then I urge you, even implore you to cast aside those ideas. Just let the melodic dark metal this clandestine group of musicians creates wash over you and then ultimately feel the sombre brooding songs yield their contemplative beauty. Despite the secrecy and the wish to remain anonymous, what we do know is Deathwhite are American and in 'Grave Image' they have produced an album that respectfully recognises the impact and influence that doomy, melodic and even gothic music has had and continues to have on metal.

On listening to the opening track 'Funeral Ground' the imagery instantly vanishes and the strength of the dark infectious metal is impressed upon you. The music has a depth and a soul that these words simply can not do justice to. It is rich in texture and dark in tone yet gloriously catchy. The unity of the band is clearly evident on this first track with the bass menacingly setting the despairing theme before the wonderfully warm emotive vocals lift the atmosphere. The music could easily be accompanied by death growls, female singing or even merely as instrumental and it would probably still sound as interesting and exciting. That's not to take anything away from the vocals but more of a reflection on how accessible the music is. The unnerving intro to 'Further from Salvation' has an eeriness which gives way to punishing drums, which in turn makes way for a multi-layered song of staggering beauty. It's heavy in emotion and in sound. The spoken word sections allowing a sense of space and the contrast in calmness and intensity, something that feels a reoccurring feature of 'Grave image'. The soaring guitar leads elevate the mood further despite the albums lyrical themes it seems being about how we as a race continue to devastate the world we live in further. 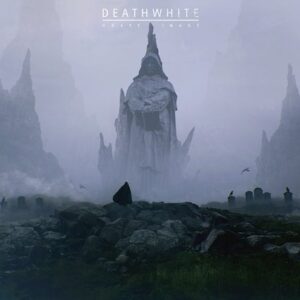 'Grave Image' runs for just under fifty mins and in that fairly lengthy time, 'Deathwhite' are able to pull you in, taking you on a bleak journey where melancholy and despair are the present. However, the album bubbles with contrasts all over it. Whilst the journey may appear grim, there are more than fleeting moments of hopefulness and triumph. These pop up and add a welcome and warming addition to the songs, picking you up and elevating you higher. That may not be the intention but with the cleverly crafted songs, that have an instant energy its hard to not to be drawn in. Powerful drawn out guitars signal the start of 'Among Us'. The sonic heaviness is accentuated again with the contrasts in quieter sections and the power of the drumming, which throughout the album obvious as it sounds, seems to hold everything together. When 'Deathwhite' hit a pummelling groove it is joyously heavy yet still sounding refined and classy.

With the clean vocals being so attractive to listen to, they are naturally a key focus and rightfully gain attention, especially when they work in harmony with the long drawn out chords or when taking on the guise of a menacing whisper as they do in 'In Eclipse'. However, there are plenty of moments and times when the music itself also shines on its own. The intensity ramps up in sections only to return delicately to a calming place. This is done effortlessly and feels so natural. The decision to not overcrowd the songs allows the atmosphere to come through and for the contrasting dynamics of the songs to be elevated further. There is a slight new wave, feel to some of the songs especially in the more introspective moments. 'Plague of Virtue' has an element of this once the ridiculously catchy pounding intro and soaring guitar subsides. In turn again the calmer sections adding a contrast to the heavier parts which it seems as the album nears its completion there are more of these contrasts.

'Return to Silence' feels like a natural place to close the album and end the journey. It encompasses everything that the album has shown. Heavy in sound, dark in feeling and its beauty understated. The lyrics adding weight to the idea that the world we live in seems to be a fairly hopeless place and we are continuing to contribute to its bleakness.

The next time I see a band or musician heavily robed or behind a mask, I for one will give them my time. This album has more than taught me that. Despite the pre conceived ideas you may have, they may prevent you from hearing some inspiring, emotive and beautifully composed music such as 'Grave Image'.