ANVIL have released their new music video 'Legal At Last', the title track from their upcoming album. “Legal At Last is our way of telling the public: ‘It’s okay, Anvil are okay, you’re allowed to like us at last!’ ”states Lips

You can check out their new video here: 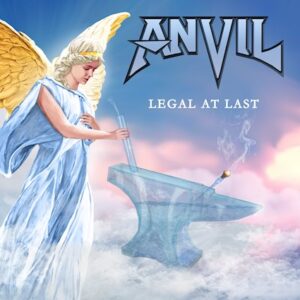 'Legal At Last' will be released via AFM Records and the album will be available as digipak, digital, black vinyl and some limited colored vinyl.
ANVIL got busted, back then when they were touring in Nebraska & this is what their new pounding and powerful single is about.

When it comes to virtues such as endurance, unconditional commitment and a thoroughly down-to-earth attitude, Anvil are the measure of all things. Like few other metal acts, the band surrounding founding members Steve ‘Lips’ Kudlow (vocals, guitars) and Robb Reiner (drums), plus bassist Chris Robertson have earned their laurels of blood, sweat and tears.

Since their 2009 documentary film The Story Of Anvil which revealed the unvarnished truth about the music industry, the world has been aware that the day-to-day life of most musicians doesn’t consist of MTV Awards, Grammy ceremonies, red carpets, champagne and caviar but mainly of energy-sapping tours with little sleep, junk food and meagre earnings. Yet these difficult conditions have made Anvil what they are today: a band that stands rock solid in the turbulent waters of a musical genre that produces music like no other, by fans for fans.

So Robb Reiner refers with a sense of justified pride to Anvil’s latest release Legal At Last simply as “one more Anvil album”. Because quotes such as this show that the band has survived despite all adversities, losing none of its musical style or sense of reality. Kudlow, Reiner or Robertson would never use clichés such as “harder, faster, louder” or attempt to present their own accomplishments as superhuman feats. Robb Reiner is right: Legal At Last is simply an impressive new statement by a band that stands for the same values in 2020 as it did when it was first launched in autumn 1978.

This new album is very special to Anvil. Reiner explains:

“Legal At Last is mainly about two things. We celebrate the legalisation of the Anvil bong because Canada changed its marijuana laws last year, which means we no longer sail close to the wind all the time. That’s why the album title announces that Anvil are legal at last.

"Our fans have always known that, but the public at large treated us like criminals for a long time. Legal At Last is our way of telling the public: ‘It’s okay, Anvil are okay, you’re allowed to like us at last!’”

Kudlow is referring to songs which highlight Anvil’s great creative power. Be it the steam hammer flair of the title track, the unmistakably tongue-in-cheek ‘Nabbed In Nebraska’ with its driving mid-tempo groove which brings to mind the Anvil classic ‘Metal On Metal’, the critical undertones of ‘Plastic In Paradise’, the doomy orientation of ‘Said And Done’ and ‘Gasoline’, or fast and hard numbers such as ‘No Time’, ‘Chemtrails’ and ‘Food For The Vulture’: Anvil always get to the core of their characteristic sound. Which also applies to ‘I´m Alive’ and ‘Bottom Line’ – both rock numbers in the best sense of the term – and the comparatively catchy ‘Glass House’.

Talking of sound: For the first time in a career that spans more than forty years, Anvil have worked with the same producer on three consecutive albums. Like its predecessors, Anvil Is Anvil (2016) and Pounding The Pavement (2018), Legal At Last was produced by Martin ‘Mattes’ Pfeiffer (U.D.O., among others). Jörg Uken was in charge of mix and engineering at his Soundlodge studio in Rhauderfehn, Germany, where Pounding The Pavement was also finalised. Says Kudlow: “As a band, you need to surround yourself with people who share the same passion and commitment. Martin and Jörg have both, that’s why we make a perfect team.” And that’s exactly what every single note on Legal At Last oozes!