Sepultura are set to release their 15th studio album called “ Quadra”. This is a concept album, revolving around the meaning of “Quadra”. In Portuguese this word translates as 'Sport Court';

“A limited area of land, with regulatory demarcations, where according to a set of rules the game takes place” explains legendary guitar player Andreas Kisser. “We all come from different quadras and these rules rule all our lives.”

The coin on the album cover, by Christiano Menezes, represents money; and this again is said to rule us all in one way or another. 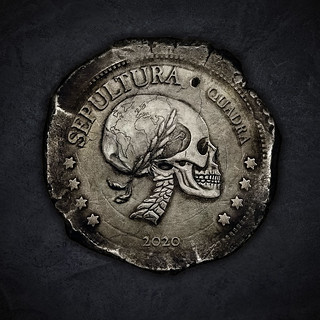 Track one begins, and you soon realise that the towering Derrick Green is at his recorded vocal best. In fact he is quoted saying “We were relentless each day giving everything that we had until complete exhaustion of the mind, body, and soul.” You also notice almost immediately, drummer Eloy Casagrande knows his way around a drum kit and will certainly have been involved in suffering exhaustion of at least body, as his drumming is ferocious. And finally you realise this is a Sepultura sounding album.

If it hasn’t clicked by the end of the first track it will have at the start of track two. It is by no means just another Sepultura album though, it has sections that if you listen to them on their own you may be left scratching your head. But the songs, as an album, do work.

The album has additions of a keyboard and choral singers, and some of the “familiar tribal pissing about” (as a friend of mine often calls it). We have an instrumental that’s rocks along and trusty Paulo Jr. smashing it on bass. In fact you can easily see why Mr Green would reference exhaustion, in the earlier comment, as they are giving it their all, right to the end.

This is a powerful, impressive, Sepultura album. A band who’s modern releases are often overlooked. Something I hope you agree is criminal.