The medea Project are a band that I had not heard of until I was asked to review this album. Their website states they are a three piece Brett (bass/vocals) and Dean (Guitar) originally met and preformed back in 2003. But the addition of Pauline on drums in 2011 brought them together in the line up we have to day. 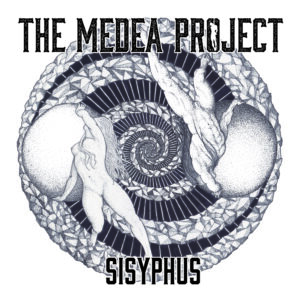 The opening track, called 'Prelude', is a slow is a slow opener with hint of the 80s goth beefed up with melodic guitars and minimal guitars and drums also influences of some of the European gothic metal, but this isn’t representative of the overall sound. The second track opens with a fuzzed up guitar and bass and those minimal drum beats. Quite reminiscent of Tiamat and Paradise Lost's more interesting periods, with dark gothic lyrics. This style is the mainstay of the album and in the track 'The Ghost of St. Augustine' really helps get the lyrics and subject matter to work.

'To Know Us Is To Fear Us' keeps the more fuzzed instruments but is much more beefed up and with the addition of a more death metal vocal style and distorted backing vocals from Pauline it gives the track a more early Anathema, Katatonia type goth metal style. This is repeated later in tracks 'Gloam' and 'Reaver', it isn’t usually my go-to vocals but in this case it really works.

It did take me a few listens but i really ended up liking the recording. If you're a fan of 90s/00s goth metal with an up to date twist then I highly recommend you get a copy of this album. I am certainly wanting to see the band performing face to face as I think that the songs will come into their own in a live setting.