The sinister keys that announce the opening track from 'Realm of the Eternal Night' by Manchester's Argesk gives an immediate air of eeriness to the track yet the delicacy and fragility of the music, chilling as it is has an enveloping warmth to it. The strings subtly playing in the background further creating a stripped back feel that gives 'Spellbound by Candlelight' an intriguing feel. Spellbinding Indeed!

Not the blistering start you might expect to a black metal album. A refreshing changes really. Black metal can be its own worst enemy at times where with the massive shadow of bands influences looming menacingly over them creativity can be stunted and originality be thwarted.  There is no such danger of any such limitations from Argesk. As the thundering bass drum powers the title track on its evident that they have the ability to convey a feeling and atmosphere plunging you into the icy depths of a dark and forboding place. The guttural growls and the harrowing screams provide the despairing narration to this journey you are being taken on. The vocals take on a further dimension on' The Adversary'. A brute of a song that stomps along with a good dose of Death Metal stylings in it. Clean singing allowing the subject matter to menacingly come to the fore in the chorus with the declaration,

"I renounce the ways of Christ, renounce eternal life" 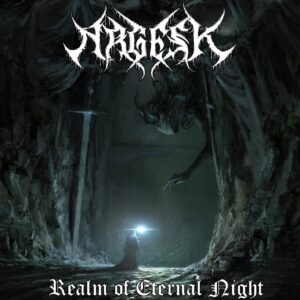 There are clever tempo changes, blistering lead guitar work and with the brooding synths holding everything together interest is maintained further. The synths are not overused anywhere on this album or at any time do they ever become gimmickry. Something that can be a criticism in much extreme metal where bands employ the use of synths purely in a bid to add that symphonic element to gain an emotional punch or to falsely add layers to songs. Often songs that are inferior in structure, depth and character. Something that is not the case with Argesk. The inclusion of synths and the dynamic they add to the pulverising metal creates a surprising contrast at times. The dark gothic brooding menace of 'In Their Image' with its beautifully immersive midsection and the soaring yet sombre parts as it culminates shows that it's not all blastbeats and breakneck guitar sections that make for a fantastic Black Metal record. A record that also benefits from a production that really compliments the multi-layered songs. It's not muddy or too clinical. Its sits right in the middle. You can hear everything clearly, evenly and nothing is too pronounced or suppresses anything else.

Album closer, 'Drowned in Freezing Waters' is a mesmeric conclusion to the album. The grimness of the vocals adding a dramatic feel yet the melancholic heart of the song and indeed the whole album is carried and heightened by the electronic synthwork. It's a spine tingling and classy end.

There is dynamism running throughout the album with an infectious energy that despite having a distinct oppressive feel it also encompasses a sense of wonder and awe. Through melody, clever and subtle time changes and structures and the emotive nature of many of the songs this allows you to experience so much on each listen. Yes, its got all the attributes you'd want and expect from a BM album but its got vitality, it feels relevant and also feels like an escape. So if you are looking for a BM album that ticks all the boxes and takes you on a brutal, primal and savage journey yet conversely has depth, character and a multilayered richness to it then in 'Realm of the Eternal Night' you've found that album.