A solitary horn sounds. ‘The Call’ is made. Then the opening line kicks in. “Long have we slumbered, but now we awake”. This is the call we’ve been waiting for. Welcome ‘Legions Arise’, the stirring battle hymn which roars from the depths, announcing the return of the legendary Cirith Ungol with their first studio release since 1991’s ‘Paradise Lost’. The blood is pumping, the joy of once more being a 14-year-old teenager absorbed by all that metal could throw at him. Cirith Ungol are back!

Named after the ‘Pass of the Spider’ in Mordor in J.R.R. Tolkien’s ‘The Lord of the Rings’, Cirith Ungol hail from Ventura, California. Formed in the 1970’s, their first record was released in 1981. ‘Frost and Fire’ was one of the original American power metal albums, and rightly hailed as a classic. It was heavy, original and fresh. The band followed it with the magnificent ‘King of the Dead’ in 1984 and ‘One Foot In Hell’ in 1986. By 1991’s ‘Paradise Lost’ the band was struggling with line-up stability and the change in musical popularity and they haemorrhaged in 1992, splitting until 2016 when, encouraged by Night Demon frontman Jarvis Leatherby, they got back together to jam and subsequently began to play some selected festivals. The current line-up includes original members Robert Garven on drums and guitarist Greg Lindstrom (who only played on ‘Frost and Fire’), vocalist Tim Baker (who joined the band in 1976 after being their head roadie), guitarist Jim Barraza and Leatherby who joined the band in 2016 when Michael ‘Flint’ Vujeja declined the offer. ‘Flint’ has subsequently played with the band live. Last year’s mighty live offering ‘I’m Alive’ demonstrated the power the band retain in the live arena and now finally, ‘Forever Black’ has arrived. 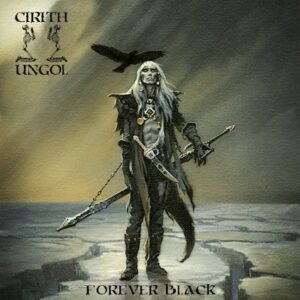 This is an album that doesn’t disappoint in any way, shape or form. The album cover features a stunning piece of traditional art, depicting Michael Moorcock’s albino Prince, Elric of Melnibone, once more delivered by artist Michael Whelan, whose iconic artwork adorns every Cirith Ungol record. Then there’s the music itself. It’s muscular, every sinew pulsing and pounding. Baker’s vocals are unmistakable, and a huge part of the band’s sound. I’ve seen criticism of his singing online. Those that do have missed the point by several stops. Baker’s voice is Cirith Ungol. His roaring delivery on the raging ‘Legions Call’ and ‘The Fire Divine’ are as ferocious as anything on ‘Frost and Fire’, whilst he gives an album winning performance on the smouldering epic ‘Stormbringer’, the blade forever bound to Elric in ‘The Chronicles of the Black Sword’. The album retains its massive retro feel, whilst at the same time giving a timeless style. The sword and sorcery subject matter is a given, this is Cirith Ungol; we aren’t going to get political commentary or love songs.

Leatherby has brought fresh impetus to the band, and his driving bass links solidly with Garven’s powerhouse drumming. (If you were sensible enough to have seen Night Demon when they supported Sacred Reich last December, you’ll understand that Leatherby has no ‘off’ switch – he manages several bands and runs his own festivals). This allows the duel guitar attack of Lindstrom and Barraza free reign and they take it with all hands, some ripping solos and fiery riffing unleashed with a fury pent up from all those years in hiatus. There’s plenty of variety too, from the funky groove ride of ‘Fractus Promissum’, the epic doom laden ‘Stormbringer’, the Sabbath mid-section of ‘The Frost Monstreme’ and the anthemic title track which ends the album.

‘Forever Black’ is an album that won’t win everyone over. Baker’s vocals are unique and an acquired taste. The old school approach may cause some to walk away, not wishing to listen to ‘old men’ playing yesterday’s metal. They are wrong. More wrong than Donald Trump when he opens his mouth. This album has been needed for 29 years. Its arrival is a mighty fillip at a time when the world is dark. The masters return. And they are most welcome.