It’s hard to believe that Georgia’s Blackberry Smoke are celebrating their 20th anniversary this year. It only seems like yesterday that the five-piece, who comprise vocalist/lead guitarist Charlie Starr, guitarist/vocalist Paul Jackson, bassist/vocalist Richard Turner, drummer Brit Turner, and keyboardist Brandon Still released their debut ‘Bad Luck Ain’t No Crime’. Album number seven sees the band return with their latest album, ‘You Hear Georgia’, the follow up to 2018’s excellent ‘Find A Light’ and sees them dive deeper into their reverence for their home state.

Georgia is rich in musical heritage and legacy, and with the introduction of Grammy winning producer Dave Cobb, another Georgian native, this is an album that simply oozes quality and class. Recorded live on the floor in a mere ten days at Nashville’s RCA Studio A, the ten tracks on offer follow Starr’s usual relaxed story telling style. 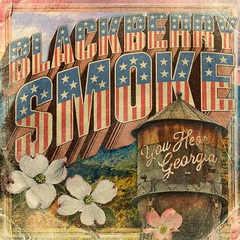 ‘You Hear Georgia’ may not have as many of the Southern Rock riffs as previous albums but listen deeply and you’ll hear a blend of delicate and intricate musical styles that Blackberry Smoke have made their own over the past 20 years. The title track is a defiant statement about the misinterpreted view of the South. Starr comments “Lyrically, the song is about the South being misunderstood. It’s obviously a rough and tumble world, and there’s a lot of bad people. But there’s a lot of good people too. It started with the idea of how people might have a preconceived opinion of you because of a thick Southern accent, then expanded into the reality of how some people just seem to have such a hard time getting along, thanks to political or religious views, or simply what part of the country you come from.”

There’s plenty of foot stomping anthems to get excited about. The crunchy riff of ‘Live It Down’ opens the album with a perfect tempo, whilst the title track should be familiar to those already acquainted with the band. The Country style of ‘Lonesome for a Livin’ sees another collaboration with Jamey Johnson, the latter’s gruff yet tender vocals adding depth to the beautiful pedal steel that shines throughout.

Although the guests shine, once more the sum of the parts is what makes Blackberry Smoke such a special band. The rhythm section of Jackson and the Turner brothers makes sure everything is cool and relaxed, whilst Still’s lush Hammond organ and keyboards add the necessary layers to give the band their instantly recognisable sound. “Having played music together for so long, it does become a sort of a telepathic thing, where we all are nodding our head at the same time, like, ‘A-ha, I know what this feels like,’ or what it should feel and sound like,” Starr says. “That’s what makes it so enjoyable to be in a band: to play with the same dudes decade after decade,” he adds. “Because when you land on something that works to you, you don’t want to stop. You want to keep doing it.”

Full of rich warmth, gentle and easy-going songs, and a perfect production, this is another masterful piece of work from a band who continue to excite.