Album Review: Bleed From Within - Fracture
Reviewed by Robbie Maguire

If the phrase "start as you mean to go on" was ever more apt it is with the uplifting ’The End of All We Know’ as Bleed From Within kick ‘Fracture’ off in a typically ferocious yet unmistakably catchy manner. The instant hi energy and infectious marauding stomp shows a confidence and a likeable attitude to the track. All the ingredients are there you’ve come to expect from the Glaswegians. There’s the familiar blast of modern cleanly produced metal, the aggression in the out front and centre vocals and then the melody and interplay with the cleaner voice. It has an undeniable swagger and on the strength of the opener should be a good indication of what is to follow. However what does follow simply ups the modern metal ante even further.

The masterful 1 – 2 of the brutal ‘Pathfinder’ and the infectiously addictive stomp of ‘Into Nothing’ further display a song writing maturity where the ability to pen well-crafted songs is not compromised at the expense of heaviness or the desire to tread a very well-worn and in metal cores case a very often travelled road. Yes you could argue that a lot of modern metal and metal core relies on this formula. You know how it goes, the anthemic choruses, aggressive vocals, tight as you like rhythm sections and produced to an inch of its life. However when though that formula works as well as it does on ‘Fractures’ then why change it? 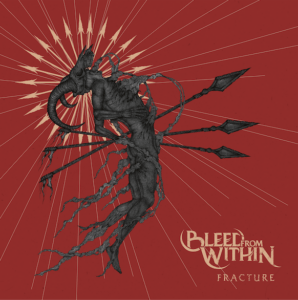 The momentum takes a well-timed dip on title track ‘Fracture’. Sitting mid album it’s a welcome slight difference to the brutality and ferocity that has gone before. Atmospheric and moody it’s a mid-paced rager that still has all the qualities needed to keep the interest maintained. Normal service is resumed as ‘Night Crossing’ follows with its memorable guitar melodies dancing all over the relentless barrage of memorable groove infused metal. It progresses into a heavy brute of a song with a thrashy heartbeat pounding. Glorious Soaring guitar leads elevate the track further and heighten the quality of this the definite highlight on an album crammed with many, many moments of highlight. One of the overall highlights is indeed the consistency of the material with all ten tracks warranting their inclusion on this perfectly adequate length album. With final track ‘A Depth That No One Dares’ left to completely devastate and pulverise you right at the end. It is simply a brutally heavy modern metal song. With synths layering the sound behind the huge djenty riffs a mammoth accessible wall of noise is produced. The outro complete with blast beats, hellish screams just punishes your senses further and sees the album end on an exhilarating highpoint. The quality never dips, your attention remains focused and is indeed a fitting way to close an outstanding modern metal album.

Unfortunately some people will not give this a listen as it’s not within their usual tastes. That’s perfectly warranted but to dismiss ‘Fractures’ purely as it’s by a band that you’ve heard of and that often get lumped in with the overpopulated and often unoriginal metalcore sound then that would be a mistake. Sadly there will be some metal purists who won’t even entertain the idea of listening to this. Not that Bleed From Within should be worried about narrow minded metal fans not checking them out for they have a captive and loyal fan base ready to lap up their latest offering. Operating as Bleed From Within are, near the top of one of metals biggest and fastest growing sub genres, it’s easy to see that the bands that are beginning to be talked about as potential festival headliners are coming from the style of metal that Bleed From Within have now become one of the leading names in. Rightfully on the strength of ‘Fractures’ they have thrown their name into contention. A few years’ time maybe but don’t rule out the inclusion of them high up at huge festivals in the near future.

‘Fractures’ could also see Bleed From Within make further inroads and become household names on the international scene. The way they have captured their own take on the modern metalcore sound should see them comfortably and rightfully step up now and start really pushing and realising that potential that they have shown for years. Despite having its detractors, Metal core and the modern metal it has evolved into when composed and played as well as they do on ‘Fractures’ is a force to be reckoned with.

'Fractures' is released on May 29th via Century Media Records.