The guitar chugs along and the bass plays the pounding riff accompanied by crashing cymbals. Then 15 seconds in ‘GO!’ and the air raid siren welcomes us to... 1983... no sorry... 'The First Strike of Steel'. I mean – who doesn’t like an air raid siren in a song? Whatever next? The lead singer wearing a flying helmet and goggles and model Spitfires on stage?

Now I’m not saying that a lot of Toledo Steel’s music sounds like Iron Maiden, but it really does. ‘Flames Arise’ could be a late-80’s Maiden track both in sound and structure. Now this isn’t a bad thing as taking inspiration and style from one of the greatest bands in any genre, works for me. 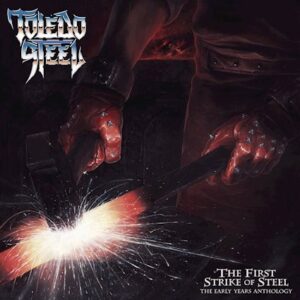 There is nothing new here at all and other clear influences are Saxon, Judas Priest, Accept and Diamond Head - Toledo Steel do it very well. The riffs are tight and the solos fit in well. Rich Rutter has a fine voice in the high ranges although some of the
lower notes feel a little forced. Tom Potter knows his way around his guitar both in the rhythms and solos. Felix Dock’s bass line is interesting and high in the mix at times while Matt Dobson bangs along well on the drums.

This album is a re-issue of their first 2 EPs, the self-titled effort from 2013 and 2015’s Zero Hour. They are presented in original order and it is easy to tell where the EPs divide. The first 3 songs, ‘Alcatraz’, ‘Flames Arise’ and ‘Black Widow’ have a production that is basic but clean and the energy is really there throughout. The second EP starting with intro ‘Zero Hour’ sounds like it had some more time and effort put into the production, with better individual mixes but overall a more muddy sound and some of the fun and vigour has been taken away.

In the genre of ‘The New Wave of Traditional Heavy Metal’ bands really have to stand out in the song writing and there are some excellent tracks here to keep old school rockers like myself happy. Like I said, there is little originality here but there is a lot of fun to be had. Corny sing-a-long tracks like ‘City Lights’ and ‘Speed Killer’ had me singing the chorus a third of the way through the song.

Let’s face it – this type of music should get you singing along, put a smile on your face and get the air guitars out. This album isn’t the best example of heavy metal or even this type of heavy metal (Monument for me have mastered the Maiden derivative and newer bands like Night Demon have more skill) but this is meant to be music to have fun to and Toledo Steel have certainly hit the nail on the head. Now where is that invisible flying-V?

Toledo Steel release ' The First Strike of Steel' via Dissonance Productions on May 15th.