I must admit that Nemesium is a new name on me, hailing from down under, they are a five piece from Geelong, Victoria in Australia. They are death metal with both black and prog influences, with considerable melodic content. Although this is their debut full length, they also have an E.P. to their name (2015’s 'Sentient Cognizance') and a pretty impressive live roster, sharing the stage with the likes of Sinister and Krisiun to name just two.

The album itself has a very good production with a thick, heavy guitar sound, with good separation between the instruments and vocals, although I would have liked the drums to have been a bit crisper and the bass a little bit clearer, but I’m nit-picking here, and the band can be justly proud of Continua’s sound The cover art, by Kirill Semyonov, is also worthy of a mention, with what looks like (to my limited eye) a striking pencil drawing of some Lovecraftian horror. Great stuff, and it fits in with the theme of the album: “tales about torturous struggle, transition into a new age, and the decimation of the world as it currently exists”, in fact I wish I had the lyrics, as the subject matter seems to be very interesting and thought provoking. 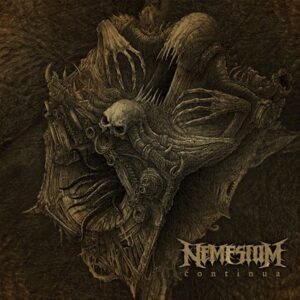 Musically the album is complex, heavy, and very well written and performed by some seriously talented musicians. Overall the album is pretty unrelenting and fast for the majority, as one would expect of an extreme metal act, but the band find time to break things up with some instrumental songs and some experimental passages and introduce enough melody and diverse parts to give each song its own identity. Stand out songs to me are the chunky 'Boundaryless' with its catchy stop start riffing and almost tribal drumming in places, 'Annihilation Prophecy' which I think was the first song released, is also very solid. My personal favourites though, at the moment, are the middle pairing of 'Virch', which is merciless in its pummelling structure and rolls over you like some sort of out of control war machine, with a very powerful solo section. And the slightly more experimental ‘The Fire and the Flesh’ which combines slower parts and a very catchy and effective middle section, with a simple but compelling riff melody, and a brilliant solo utilising some great musical elements. 'Relive the Nightmare' is also a great way to end the album, the longest track here, it’s almost like a complete summary to the rest of the album, with a slow building intro, fast and slow parts and a very compelling and aggressive drive.

Too be honest though, there isn’t a weak track to be found on 'Continua', it’s a very confident and mature record which many, more established acts would be proud of. Here’s hoping that when the world returns to more normal times they can tour and promote it like they deserve. A very pleasant surprise and a big thumbs up from me.