Ok before I begin; already at the 1:05 mark in the opening track ‘Sole Mission’ there is a massive “side to side” part which hit extra hard due to the Covid-19 caused deprivation of live shows. I just want to mean mug and stomp across the man-made horseshoe in front of the stage, but instead of picking up proverbial coins from a sticky club floor I’ll have settle for socks and the occasional dust bunny in my apartment. Point is, The Third Kind already have my full attention!

Established in 2015 and hailing from New York City, the crossover hardcore punk outfit The Third Kind, features current and former members of All Out War, Bastard Clan, On The Offense, Vise Massacre, Run Like Hell and many others. That’s quite an impressive roll call and it also shows that these dudes are the real deal. It’s now just over two years since their 2018 self-titled E.P. plummeted down to Earth in a fiery ball of concrete jungle rage which made a crater in the underground crossover landscape. The supergroup is now back with a pissed-off, sci-fi obsessed debut full-length album entitled ‘Man vs Earth’. 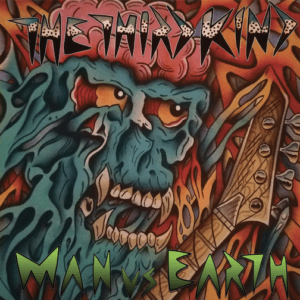 Although continuing their already established extraterrestrial theme, it’s clear that they have made a giant leap regarding the production on this release. Engineered by the band’s own Taras Apuzzo and mastered by Dan Emery, the album delivers a tight sound with the right amount of old-school, late 80’s, early 90’s NY crossover gruff à la Merauder and it hits you right in the gut from beginning to end. This album makes you want to move – which is an indispensable quality of any hardcore record. I already mentioned the “side to side” stompage in ‘Sole Mission’ and without skipping a beat we find ourselves relentlessly circle pitting to the title track ‘Man vs Earth’. Mind you, this is not just a mindless thrash anthem. No. If we care to aim the telescope at the lyrics, we can quickly establish that it’s an uncynical commentary on man being the Earth’s number one enemy and what activities we indulge in to prove that we in fact are. The truth hurts.

Sure, ‘Man vs Earth’ is a fast-paced, yet steady, ride across the crossover galaxy. But as with any exploration into the void of the old school NY scene, we strike the groove. Whether it takes your mind to Long Islanders V.O.D, Syracuse heroes Earth Crisis or… well, Newburgh’s finest: All Out War, The Third Kind skilfully infuses a hefty helping of groove into this record. Specifically, in songs like ‘Silver Painting’ and ‘Some Things Come Back To Me’ which take your mind straight back to early- mid-90’s NY crossover hardcore. The former being a slower, more melodic tune which allows room for Richard Muller’s piercing yet powerful vocals, reminiscent of Stéphen Bessac (Kickback) and Karl Buechner (Earth Crisis). The latter being a symphony of sonic emotions which showcases the skilled musicians, and might I add, endurance of drummer Brian Shonen’s calves in the double bass drum crescendo. I always love to know what sources of inspiration bands have. Because it usually all connects, see. Of course, with a band like The Third Kind, with members who have been around the block one or two times, it might seem easy to pinpoint a few staples in the record collection. But I was pleasantly surprised when I saw that The Third Kind noted down death metal legends Death and Entombed (amongst others) in their “About” section on Facebook. And I’ll be damned if I don’t hear notes of groovy death metal on this album. Most noticeably in the album closer ‘Hail To The Wicked’ which gives me a slight hint of Obituary’s ‘Redneck Stomp’ (yes, I realise they’re from Tampa and the song was released in 2006, but if the shoe fits…).

In 1988 Mike "Judge" Ferraro sang “I want it back again, the spirit that we once had” in the NYHC classic 'New York Crew'. And granted, I’m not a NY native and maybe I’m way off, but with new bands like The Third Kind – the spirit clearly never went anywhere. This album manifests the essence of NY crossover hardcore punk and proves that the genre and the attitude stand the test of time. For fans of the bands mentioned in this review, I’m sure this album is already on your radar. But for anyone who once sang along to ‘Master Killer’ or just worships everything NYHC – this is for you.