My first introduction to Destruction was their first live album ‘Live Without Sense’ back in 1989, so it’s fitting that my first official Destruction review should be their latest live album ‘Born to Thrash’. Said album; ‘Live Without Sense’ was a landmark release for the band, they’d been on the scene since 1984, and although they had released 3 full length albums and a few EPs, all of them had been marred by terrible production and sound issues, that said, the quality of the majority of material was never in doubt. The addition of Harry on 2nd guitar and Olle on drums had partially rectified some of those sound issues on ‘Release From Agony’, but it wasn’t until ‘Live without Sense’ that the definitive versions of those songs were realised, every single one was superior to its studio counterpart, and it also came with a lyric sheet, almost unheard of, then or now with a live album.

Fast forward 31 years and we get ‘Born to Thrash’. Now if you’ve never heard of Destruction, well firstly, where have you been, and secondly, where have you been? OK, a brief summary, they are one of the big four of Teutonic thrash (the others being: Kreator, Sodom and Tankard). They started as a 3 piece, with Schmier (bass and vocals), Mike (guitar) and Tommy (Drums) and their brand of thrash was chaotic and very punk influenced with an energy and sound based on Mike’s rather unique riffing style and Schmier’s banshee like vocals. As previously mentioned, they expanded into a 4 piece with the addition of Harry on 2nd guitar and Olle (replacing Tommy) on drums. This lasted until Schmier was jettisoned and after the release of the rather good but underrated ‘Cracked Brain’ in 1990, the band then went into decline, releasing some quite frankly embarrassing and truly awful albums and EPs until the return of Schmier and the band ‘re-booting’ as a 3 piece in 2000. Since then they’ve been very consistent, and have released some very well received material, the best of which is probably the excellent ‘Antichrist’, a bona fide modern thrash classic. 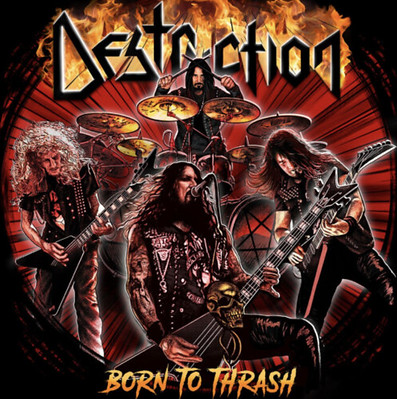 Now a year or so ago, and after numerous drummer changes over the years, the band once again decided to expand the line-up to a 4 piece, with the addition of Damir Eskić on guitar, and drumming veteran Randy Black. This version of the band recorded last years ‘Born to Perish’, a solid if unexceptional album. And to follow on from that we have ‘Born to Thrash’, a live album which contains material from across the band’s entire 36-year existence. If you are new to the band then this the perfect introduction, much like my own 31 years ago, many of the bands classics are on show together with newer songs, so we have ‘Curse the Gods’ rubbing shoulders with ‘Nailed to the Cross’ and ‘Bestial Invasion’ fraternising with ‘Thrash ‘til Death’, they also play two tracks from the last album ’Born to Perish’; the excellent title track and the equally good ‘Betrayal’, both of which hold their own against the older material. The production is excellent, every instrument is well balanced in the mix and the recording team get that live ‘feeling’ across well, and the addition of Damir, means the sound is fuller and more consistent, especially during the solos, which was an issue with ‘The Curse of the Antichrist – Live in Agony’ the bands second live album, which was recorded as a 3 piece.

My only real issues with ‘Born to Thrash’ is that it’s too short, 10 tracks just aren’t enough to represent a band with 14 full length studio albums to their impressive back catalogue, that isn’t even one per album. Destruction fans deserve at least a double, if not a triple release (ala Iced Earth’s ‘Alive in Athens’). Not to mention that there’s a certain amount of repetition from the previous live releases, with only the two tracks from ’Born to Perish’ not previously released, there’s no other newer material from the likes of ‘Day of Suffering’, ‘Spiritual Genocide’ or ‘Under Attack’, all of which weren’t classics like the older albums, but certainly each have two or three tracks worthy of inclusion. This is still an excellent release, but for me it’s only essential if you’re either new to the band (and if you are new, then I say definitely get this, as the band have some of the best riffs you’ll ever hear), or haven’t got any of their other live albums, or course you’re a Destruction completist.