“TRIAL was formed in 2020 through a shared vision: dystopian, vistas shrouded in acid precipitation, deformed jagged remnants of superstructures, and humanity rising up in scattered, intent hordes.”

It’s paints a pretty bleak and stark landscape. Lyrically the band have certainly achieved their aspiration, with desolate titles such as 'Eyes Against Infinite Suppression', 'Colony of Trial' and the super grim 'Towers of Short Term Lies' the content mirrors that sense of hopelessness. On the other hand, I have completely no idea what the band are trying to achieve. 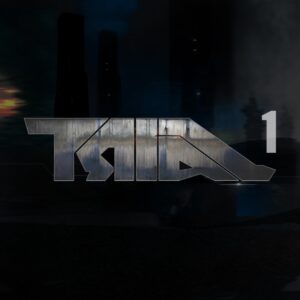 While lyrically they leave nothing to criticism, sonically they are a different proposition. Maybe it’s me, it’s entirely possible that I’m missing something, but the audio here is not what I expected. I think the "dark thrash" description, completely misses the mark, for me this is more "dark, avant-garde industrial metal", there is nothing here relating to thrash. There’s a tradition in black metal that you’re not really black metal unless you have a raw lo-fi sound, it’s a tradition that I’ve never really understood, and I don’t know if that has also had an influence on Trial’s sound, but that’s what I’m inferring.

The sound is even drearier than the lyrical content, but not in a good way. It’s dark, yet weak at the same time, the guitar sound is probably the strongest part of the production, the fuzzy bass is also OK, but when the two are combined with the distorted, yet bland drum sound, it starts to become a lumpen, congealed chaos, which detracts from any power the music has. It also doesn’t help that the vocals are buried deep in the mix. Without the lyric sheet, there would be very little chance of deciphering what the vocalist was saying, not because of the pronunciation, but the low volume level. I must deduce that this is the sound the band were after, as I can see no other reason that you’d release an E.P. with this poor a sound unless that was your original intention. Song wise, the sound didn’t really let me discern between them, it all merged into one long track, with little or no differences. The songs are not technical, and I’m sure the three middle songs all start with a variation of the same riff. Occasionally a lead or melody would pique my interest, but then it was gone, drowned in a sea of dirge.

To summarise, they say art imitates life, and that is true here, Trial's '1' is a wretched musical distillation of the UK over the last 5 years, it’s austerity, brexit and the covid-19 pandemic rolled into one, and then some. I have the feeling that’s exactly what Trail wanted, and to that end the band has accomplished their mission, and good luck to them if that’s the case. Personally, I’m just not sure people want to listen to, or are ready for that sort misery.