We are all missing live music right now, it’s been 120 days since the last show I attended, a lot longer for many other people. None of us could have predicted just how much of a negative effect 2020 would have on the live music scene. As the blanket ban on concerts continues, bands and promoters alike are looking at other avenues to keep the scene alive. Many have turned to streaming as a possible viable alternative and the latest act to try it out are Corby noise mongers Raging Speedhorn.

Teaming with Hotel Radio the lads head to an empty Underworld in Camden Town for this social distanced performance of face melting proportions. At just £3 for an hour and a half show it was, quite frankly, a bargain!

As the feedback rings through my home sound system the Speedhorn boys appear from the darkness and take up their allotted spaces on the stage, Frank and Dan allocated spots on the floor where the fans would be on any other day. The echo of Franks microphone being smacked against the stage, the count in to show opener ‘Redweed’. Despite the lack of crowd, the traditional Speedhorn intensity is fully evident, seeping through our TV and Laptop screens and into our homes. ‘Bring Out Your Dead’ and ‘Superscud’ follow, two classics from the bands arsenal being delivered with ferocity.

Then they move into different territory, a new track from their forth coming album. It’s gritty it’s dirty and it sees Dan’s vocals come into their own, a song written for him for the first time since joining the group full time last year. They follow this with another new track “let’s see you bouncing on them sofas” Dan cries as Jim Palmer riffs through an awesome intro.

It’s soon back onto the familiar material as they blast out ‘Fuck The Voodoo Man’ and ‘The Hate Song’. As Dan roars through ‘Motorhead’, Frank swigs from a bottle white wine, the dramatic pause mid song enough to make the watcher think “shit has the stream cut out”. Another new song follows, heavy as hell it’s sludgy elements bring a different tone and they’ve obviously tried to push the boundaries a little with their latest song writing, which works to great effect.  “Now a song for the old school Speedhorn crew” Frank declares as they launch into ‘Thumper’, the band heading towards the end of their set.

Whilst being sat on your sofa isn’t the same as being in a real venue. In the current climate this is as good as we are going to get right now. Live shows aren’t going to return any time soon and Raging Speedhorn have jumped on this format early and highlight just how good a live stream can be. 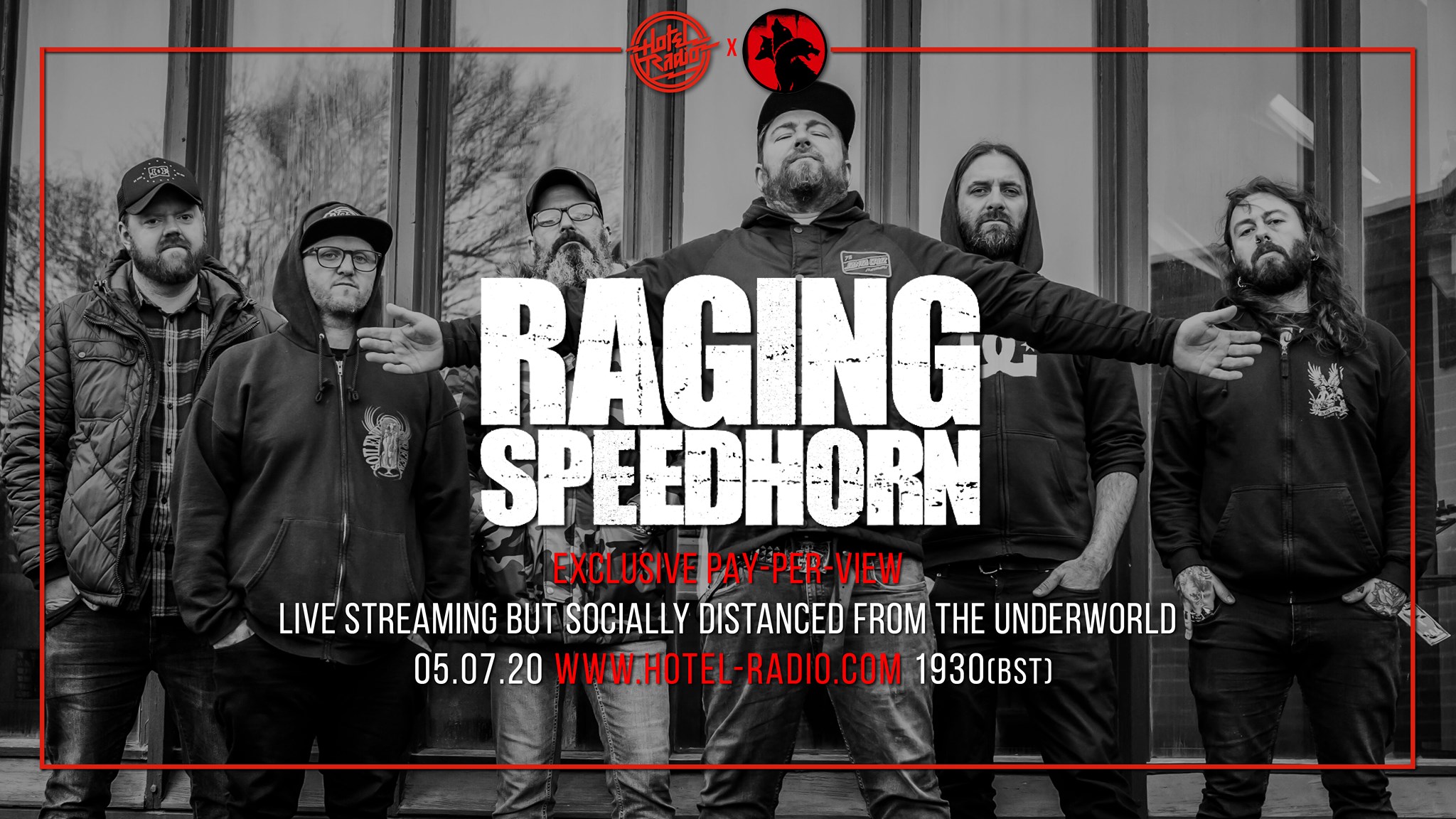