Album Review: Svalbard - When I Die, Will I Get Better?
Reviewed by Robbie Maguire

People choose to play music for a whole host of reasons. Some it’s for the adulation. Others for therapy, fun or simply as a job. There are others, maybe a minority who feel the need through their music to raise awareness of issues that must be addressed in society. A voice for the muted and the suppressed. Bristol four-piece Svalbard are certainly a band who thankfully play their music so they can articulate their very strong and purposeful message.

‘Open Wound' welcomes the listener with soaring euphoric intro and its anthemic strains make way for the barrage of tight riffing and furious drums that Svalbard seem to not only excel in but have a unique feel for. This emotionally charged rollercoaster of a journey begins on a high and like the very best coaster ride you are treated to an immersive, challenging but ultimately rewarding experience. On ‘When I Die, Will I get Better' Svalbard display the contrast of the downright heavy and the lighter, glistening beautiful melodies that play such an integral part to their overall sound. Always able to create atmosphere within their songs the genuinely thought provoking ‘Listen to Someone’, with its subject of mental illness is tackled. The listener is urged to listen without judgement. A fairly simple and fair instruction, however one which so many people just don't seem to be able to commute with. The delivery and passion emanating from all four members simply pushes the articulation of the subject matter home. There is the influence of shoegaze and the deeper introspective moments sit proudly behind the punishing rhythms. This is an aspect of the sound which adds a real variety to the blackened hardcore that Svalbard effortlessly make thier own. 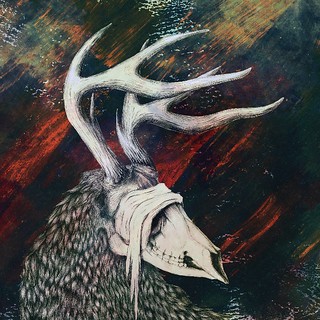 The other thing with Svalbard is that the very real lyrical themes make the songs denser, deeper and with that the whole sound is completed. Many bands can make a ‘heavy' song but can they heighten the intensity with lyrics and delivery of those lyrics to bring about the depth and rounded sound that Svalbard excel in? Simply put no they can't. Very few bands at the moment have the sonic tenacity and magnitude in their music as Svalbard do with their blissfully brutal music. ‘When I Die, Will I Get Better? not only makes you think and shock and therefore have real relevance but it also inspires and informs. Any piece of art that makes us question and delve deep is a good thing.

Anyone lucky enough to have seen Svalbard live will attest to their sonic brilliance, tightness and energy. Producer Lewis Johns must be applauded for capturing the true visceral and powerful elements of the Svalbard sound. Masterfully this integral part of their make up sits alongside the softer, more serene moments that allow that introspective reflection and it all feels wonderfully connected. The sound is crisp allowing the huge riffs to cut through and whilst the bass is understated it dutifully binds the songs together. Naturally the drums characteristically drive the album on without being too prominent.

The punky energetic ‘Silent Restraint’ reveals a catchy blast of attitude and an infectious chorus that wont leave your head for a while. No bad thing. They have the ability to make an indelible mark in your ears, your heart and ultimately your conscience. ‘The Currency of Beauty' launches huge slabs of angular chords and shimmering swathes of lightning tremelo to continue to punish the senses further. The sheer gravitas of the heavy moments are made all the more clear by the serene, softer and more ethereal moments. Guitarist and Vocalist Serena Cherry further demonstrating her scowling and commanding harsh delivery of the lyrics and then the wonderful softer clean singing. All that’s left then is for the final track 'Pearlescent' to literally crush you with its subtle beauty. After such an emotional journey where you’ve been pulled and moved right to the very core, the crescendo is a joyously welcome release. The blissfully warm vocal delivery as the song bears the end is a stunning but all to fleeting communion of entrancing singing. Deep rich backing vocals from guitarist Liam whilst subtle add enough texture and tone to make for a duet of softly warming and captivating quality. If ever there was a way to close out such a gritty, at times ferocious and multi layered album then this is it.

The music carries a sonic punch and grandness but the emotional pull that Svalbard have by addressing such issues as misogyny, depression and sexism is heightened and makes for a viscerally invigorating listening experience. Something that is such a big make up of why their unique music has such an addictive grasp

Not only will this please old fans but Svalbard will reach a new generation of people. Through their music Svalbard choose to highlight some of the many injustices that people suffer and the very isolating and debilitating effects these acts and behaviour can have upon people. ,’When I Die, Will I Get Better?' will rightfully see Svalbard’s reputation rise but as important as that it will draw peoples attention to the very relevant issues that this empowering and compelling album focuses so directly on.