Album Review: Public Enemy - What You Gonna Do When the Grid Goes Down?
Reviewed by Carl Black

It's always exciting to have a new Public Enemy album imminent. With the breakup of Prophets of Rage, Chuck D is front and centre. Flavour Flav is back in the fold, and although Terminator X, he who Speaks with his hands, is still putting his feet up, DJ Lord is spinning the discs and expectations are high. We get seventeen songs of pure fury from two turn tables and a microphone…

That’s not entirely true. Public Enemy have always filled albums with short instrumentals and skits that pepper their recordings and 'What You Gonna Do When the Grid Goes Down?' is no exception. We get six of these short interludes, intros and outros. Not bad when all said and done, eleven banging new tunes where Chuck and Flav tell us what time it is! 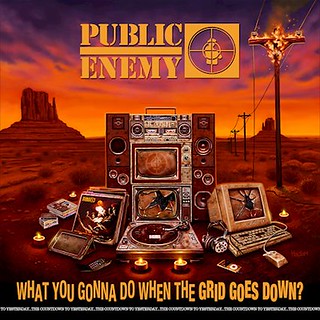 We’ve got two remixes; a remix of 'Public Enemy Number One' (renamed 'Public Enemy Number Won') that has Mike D and Ad-Roc from The Beasties spitting all over it. Hands up if you miss MCA and the Beasties? We could do with their wisdom right now. The album also includes a, I say remix but, more a re-working of 'Fight the Power', which is littered with the crème of fresh young rapping talent, who must be thanking their lucky stars to be rapping over such an iconic tune. So we get nine new tunes with Public Enemy ripping up the poor in the store!

Six of the tracks have guests spots on them This is Public Enemy so we are not talking about any two-bit guest! We get, amongst others, B-Real and Ice-T, but never the less, taking out the remixes and guest appearances we only get three tunes of pure, unadulterated Public Enemy.

One of them, the single, 'State of The Union', is slightly spoiled with the chorus refrain, having swearing shoehorned into it, seemingly just for the sake of it, makes it disjointed and sloppy.

Chuck D is an Institution. He does what he does, when he raps, we listen..

I am slightly disappointed, and would have liked more of the clean, hear the drummer get wicked, break beat, hard-core rap. We get a smoother, cleaner Public Enemy here, but only briefly, once you peel away the short interludes, remixes and guest’s spots we really only get a short time and a few songs with those pure Public Enemy sounds we know and love!