You know the feeling when you look at an album cover and the thought “I am going to like this” appears in your mind along with a wry smile on your face. If you do, and I know you do, you will also know the sense of satisfaction that goes along with that statement when it happens to be correct.
The Brothers Keg have achieved this feat totally. This, their debut album 'Folklore, Myths and Legends of the Brothers Keg', is a fine example of heavy, heavy, interesting and tale-telling music. Since their emergence in 2018 this London trio have recorded an E.P. and played many gigs including support slots for many doom and stoner luminaries. This gig list also includes a show at Bloodstock Festival in 2019. The band signed to APF Records in the same year; a perfect home for their style of metal. 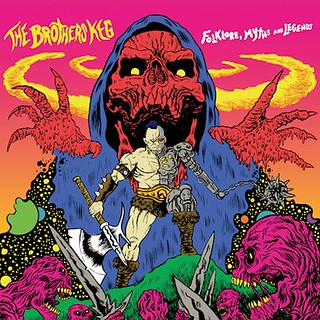 This album is not heavy due to brutal fast technical riffs; it is heavy because of its slow pounding heavy massive riffs. The inclusion of spoken sci-fi and fantasy voice-overs just adds to the world created by the afore mentioned album cover. In fact guitar/vocalist Tom Hobson mentions H.P. Lovecraft meeting Queen’s Flash Gordon.
The music feels warm and inviting as the heavy tunes slowly massage you and take you to another world. 'Moorsmen' the first track is a nine minute monster beginning with spoken samples and flowing organic music that just caresses my speakers in a heavy otherworldliness. This track is slow then fast but always heavy. Other tracks such as 'The Ice Melteth' are a little calmer but certainly no less beautiful and creative. 'Brahman' their very own 'Rime of the Ancient Mariner' track clocks in at 12.55. Once again spoken word helps create an atmosphere of fantasy, continued by the epic music that follows. Slow crunching riffs once again swirl around your head with a slight psychedelic tinge that fills the song throughout its duration.
This is a very, very accomplished album from a very, very accomplished band.  I know doom metal is not supposed to make you smile, but I am beaming!
Ladies and Gentleman enjoy your doomageddon, because I certainly am!