Music can do lots of things, move a stone hearted man to tears, make a soulless person dance and heal open wounds inflicted by life’s ups and downs. DevilDriver prove this. Dez Fafara has worn his heart on his sleeve for well over 25 years, 20 of those years in this here band. He’s gone through the mill both professionally and personally. All of this pain and heartache is poured out into this, two album project, of which volume one is released this week. Whatever your, or my, judgment is on the quality of this material is inconsequential, the music laid down on these releases have helped exorcise the demons that have been a mill stone around his neck. Once again, music is the answer, the healer, the medicine. 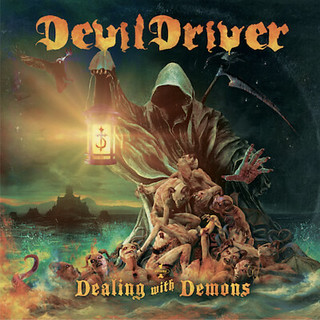 The demons released and the cutting of the rope attached to the real life problems, affects and influences the music on 'Dealing with Demons I'. The tracks have a razor edge guitar sound with deep heavy riffs. However, there is a vulnerable side to this album. A slightly softer sound running alongside the all-out bombastic assault of the songs on show here. The DevilDriver sound is sensitive as it is brutal. It’s an unrelenting attack that will beat you fiercely but will have you welling up at the same time. Dez lays his faithful vocals over the songs. Harsh and raw, with very little clean singing, and filled with passion that could go on for days. The songs have that slight nu-metal hook about them that suck you in, but this is not a commercial record. The drums are very defined. You could say the drumming has a hint of laptop metal about it, but stays just this side of organic.

The exorcism of Dez Fafara is here to hear. Banishing demons has never sounded so good. Faithful and true, not even lockdown can stop DevilDriver.