Hailing from Rome in Italy, Fenisia are an old school rock band with a big sound and 'The Spectator' is their third full length album. According to their website it’s a concept album in which “Lord Lumieres is a metaphor the knowledge and truth, who investigates and unmasks the leaders of a fanatical cult.” 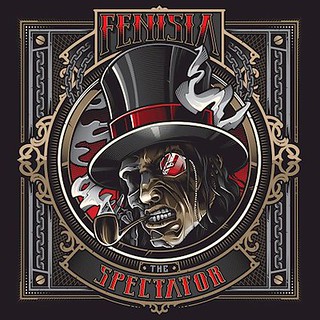 'Lord Luminary' the first track on the album is a great start to an album with Tig Smiths driving old school drums, squealing guitars from J Snake and Nic Ciaz, it has a modern sound but is also quite reminiscent of mid career Ozzy Osbourne. Nics vocals are good and again have a nostalgic feel. The album continues with the oracle the influences are clear, in a good way, the band are tight and lots of nods to mid period American rock, hints of Cooper and Ozzy, with slabs of rock classic chord progressions and catchy chorus, this sound is repeated throughout the album. Songs like wake me up and conspiracy rules, have that same feel, hints of monster magnet with big drums and great guitar riffs.

'Manifesto', the new single, is catchy a little slower than most of the album but still have a driving pace, with the single note squeals and light vocals it really does feel like a Zakk Wylde era Ozzy track. The album finishes with a cover of Lenny Kravitz classic 'Are You Gonna Go My Way'. A nice reworking with big drums and adding chunky guitars the band really make it sound like their own.

Overall the album is a good listen and although the tracks can be listened to on there own its an album to be heard to in its entirety. It really is a great album with the best bits of old and new creating a fabulous rock album. With riffs, hooks, charismatic vocals and classic style songs. A refreshingly new, old school album.