Swedish black metal band, Svartsyn, is currently the solo project of founder Ornias. Forged in the early 90’s Second Wave of Black Metal, the roots are there to hear, even in 2020. Most of the usual tropes are there - almost indecipherable logo, beautifully designed monochrome artwork, interlaced, complex and tempo-changing song structures and extended track times.

Sometimes black metal made in this style can almost feel like a parody of itself, especially when a band has not strayed away from the form of the early day in Scandinavia. Fortunately, there are no such worries here and Svartsyn have produced an excellent, varied album which keeps my extreme metal needs most definitely satisfied. 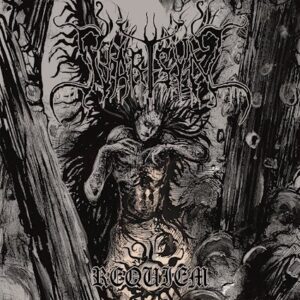 Melody plays a big part across Requiem. The atmosphere and bleakness are there within the writing and playing, rather than, as often, the production, which is perfect for this type of music - not overly done and not pared back so much as to make it a tough listen. The musicianship is excellent and the vocals, while harsh, are understandable and appropriate.

This is an album that really needs to be listened to as a whole (as with many, many metal albums) and there isn’t really a standout track. There are some thrasher parts, the first half of ‘Inner Demonic Rise’ and the middle section of ‘Mystery Babylon’ for example. For the headbangers out there, the main riff in ‘The Desolate’ will have your head nodding along - a doomy, dark and devastating song throughout its eighth and a half minute running time. ‘Spiritual Subjection’ is the most ‘traditional’ black metal song here, with the blast beat drums in place for most of it and there are some excellent rhythmic riffs especially in the mid section. ‘Little Horn’ completes the album in fine style.

Ornias has forged an excellent traditional black metal album, without it sounding forced or falling into the parody trap. The listener is bludgeoned as expected but also taken on the extreme journey that the best of the genre provides.