Standing up and being a voice for those who can not speak for themselves is an enviable platform to find yourself standing on. With a public platform to rally against the very fabric of society you feel is poisoning and harming people now and in the future is a privileged position. Ett Dodens Maskineri steadfastly use their new album ‘Det Svenska Hatet' (The Swedish Hatred) as a vehicle to air their response to the growing far right ideals present in their homeland of Sweden. With that in mind it’s no surprise that once the faux native folk intro subsides and the blistering, gritty hardcore flexes its considerably raucous muscles they indeed have the perfect vehicle to spread their word.

The double pronged vocal attack of Daniel Garpebring and guest Emelia Henriksson (Radium Grrrls) adds a vitriolic bite to the marauding opener ‘Dodens Maskineri’ (Machinery of Death). It pulsates wonderfully as strains of softer guitar wash over the rhythmic, industrial feel being vigorously dished out. The doom heavy, feedback laced garage rock feel of ‘Slaver Under Marknadsekonomin' (Slaves under the common Market) reduces the sonic punch momentarily yet Ett Dodens Maskineri still have the collective cohesion to be able to deliver a rabid bite of gnarly, anarchic punk n’ roll. There is a rawness and vibrancy here yet the crisp production allows the drums and bass to sit perfectly in the mix. Working seamlessly together steadfast in their drive to punishingly propel the album onwards. 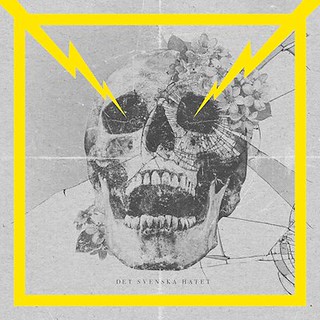 Theres little time to regain your breath as the explosive ‘Trygghet Tradition' rampages brutally. Frighteningly direct and with no subtlety it’s a hefty guttural shock to the system. You’ve barely enough time to recover from the blisteringly thrashy hardcore as the contrasting spoken voice montage and white noise effects adds a depth of character and short lived variety to the aural attack being administered.

The searing energy emanates strongly from the savage blasts of fury. It cuts through and is a constant throughout this forty minute blast of punky D beat infused hardcore. There’s simply no getting away from the ferocity of the tracks. This is heightened by the intensity of the gnarly vocals with Daniel lashing out his commands with a real sense of urgency making for a compelling addition to the bands savage armoury.

From the ferocity of raging single ‘ Lasta Dorror’ (locked doors) to the bleak, dystopian darkness of ‘Stad I Ljus' (City of Light) there is real depth here. Yes, Ett Dodens Maskineri dont veer from their well oiled, greasy punk infused formula but they do add just enough variety and subtlety be it spoken word samples or changes to the tempo to keep you fully engaged.

The doomy menace of highlight ‘Memento Mori’ closes this blisteringly savage album. Whilst there are elements of variety there is a distinct feel of completion here. As though the job is finished, or at least the message intended here has been victoriously conveyed. Though to wait to the final song to develop and showcase greater depth in their sound than already present on the album is either bold or brave. Whatever it is, it works. This slick yet punchy closer dishes out some welcome variety to the explosive and rampant feel the album has had up till this point.

‘Det Svenska Hatet' is a rousing call to arms and whilst the lyrics are in Swedish, the sentiment and power is felt through the passionate delivery of the themes. If strikingly blunt hardcore with a melodic crust punk heartbeat is your thing then ‘Det Svenska Hatet' is for you. It gets straight to the point. A point that the band deliver with enthusiasm, integrity and searing energy.