You know when you stand in the presence of greatness. It’s an aura of magnificence, it’s to stand in attendance with majesty. What happens when you stand shoulder to shoulder with the metal idol, the divine deity, a legend? What happens if your wing man, to said legend, for over thirty years goes it alone? Well some of the magic rubs off. But it’s an indelible mark on the career. Phil Campbell is an amazing guitarist, a fantastic performer and such a good bloke, you just want to buy him a drink. He is one of only a few, that have been touched by the hand of god, in the same way that, Mitch Mitchell and Noel Redding had been blessed. It's impossible to mention these incredible musicians and artists without tagging in their former band mates, which must be a blessing and a curse. 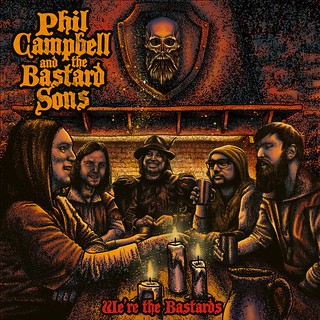 Phil Campbell has embraced his past. It’s part of his soul, like his playing. And like the great man himself, Phil has been uncompromising and stayed true to himself. Whether he likes it or not, he is Motorhead. And he carries it well. He’s got his Bastard Sons, some killer riffs, and a baying audience that crave some rock and fucking roll.

On 'We're The Bastards' we get the variety in the song, but never straying too far from the path. We get fast ones, mid paced, sleazy, bluesy, rocky and thrashy songs, but all under the banner of that dirty rock and roll that we all love. It’s a window into “what could have been” moment for all die hard Motorhead fans as the song writing is all there. It does not have Lemmy’s input, his bourbon soaked vocals, his witty lyrics or his bass that sounds like a guitar, but nor should it. If Phil tried to emulate that, he’d be dead in the water. He’s done the correct thing, trusted his instinct, and produced an album that is his own. It could have been tempting to re-release and cover previous glories, but he has not.

Phil can write a riff, break a heart and has assembled a band that can rock. It’s a joy to listen to. If you like Motorhead, you’ll like this. If you like Guns 'n' Roses or the Foo Fighters, (both of which Phil Campbell and the Bastard Sons have supported in stadiums) then you’ll like this. Plus, Phil is proud of his history so you’ll get a Motorhead tune thrown in too.

ICYMI - Check out our interview with Tyla Campbell here!