The listener is greeted by an eerie haunting atmosphere. They cries of a witch ring out, putting ‘A Curse on Men’. This the introduction to Dread Sovereign’s latest opus, their third full length album ‘Alchemical Warfare’.

Dread Sovereign formed in Dublin a decade ago, the brainchild of Nemtheanga (aka Alan Averill, frontman of Primordial), who takes on bass and vocal duties in this project alongside Bones (guitars) and JK (Drums, also of Conan). The outfit take a unique approach to the darker side of heavy music, melding elements from multiple genre’s elegantly into a marauding beast. 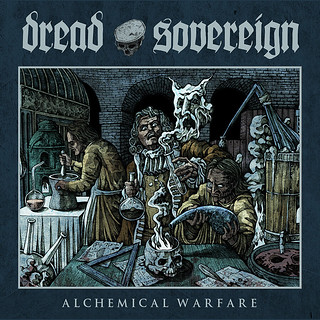 From the ‘A Curse on Men’ introduction the album kicks off properly with ‘She Wolves of the Savage Season’, a doom laden monstrosity with perfectly timed tempo changes that enable the band to effortless move from doom to black metal, to NWOBHM and back again.

The whole recording has a wonderfully retro feel, an overtone that resembles the crackle of fuzz on the needle of your record player. It’s not over produced, it's not polished to a smooth and shiny finish, it's full of earthy grit that makes the recording feel more real and resonates better with the listener for it.

The atmospheric minute long interlude of ‘Viral Tomb’ makes the hairs on your neck stand and leads you forth into ‘Devil’s Bane’. Classic heavy metal riffs and lyrical content meet a doomier, darker feel. Album closer ‘You Don’t Move Me (I Don’t Give A Fuck)’ has an almost Venom-esq resonance to it, the romping intro leading you into a faster paced onslaught of an angry song.

In ‘Alchemical Warfare’, Dread Sovereign have produced something entirely unique, drawing on influences from a number of genres, ensures that what they are doing has never been done before. Whether you are a fan of classic doom, black metal, NWOBHM or even death metal there is something here for you.