This is an album that has you rifling through the wardrobe for that faded flannel shirt and skate shoes. Yes, Stonebourne make no bones about their love of the grunge with over an hour of very impressive rock which doesn’t so much worship at the altar of Pearl Jam and Soundgarden as jump up and down on it.

But before you dismiss it as mere copycat work, it’s certainly worth giving it a listen. There are echoes of more than your usual grunge outfits such as Alice in Chains, with bits of Counting Crows, U2, Tom Petty and other Americana deep in here, alongside the more introspective misery, teenage angst and weltschmerz. 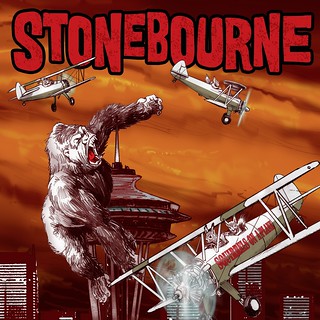 Despite the curious album title, it’s a seriously good piece of work by the Nurnberg outfit with ample anthemic energy. Tracks such as ‘Easy’, the thumping ‘Not Your Jesus’ and the powerful opening song ‘Through the Waves’ have plenty of variation, and whilst the sound is rooted in the past, there is a fresh, contemporary flavour to the 15 songs that are on offer. The band can do dark, evidenced on ‘Butterfly Effect’ with its sinister bass line that leads the line from start to finish.

With many of the songs clocking in at around the four-minute marker, Stonebourne could have overfilled the album badly. 15 tracks are a lot for a debut release, but I’m pleased to say that this isn’t the case, as the time just flies by. There are moments when you need to check that you haven’t slipped on Pearl Jam by mistake. ‘Armed and Dangerous’ sees the vocals blend Bono and Eddie Veder, the slower pace almost ballad like. That’s followed by the title track which is a riff driven anthemic rock track.

In fact, the whole point of this album is that it is simply decent rock music. Avoid the unnecessary labelling and badging and listen to it for what it is. Stonebourne don’t mimic their heroes, they build on the concrete foundations. There are few bands around today who don’t draw on the past. Stonebourne may keep one ear and eye on the likes of Cornell, Staley and Veder, but this album is not hero worship. Far from it. I’m still mystified by the title though!