After the success of 2020’s Where Only Gods May Tread, the Mancunian death metal legends Ingested have moved swiftly to shatter any remaining peace at the start of 2021 with the re-release of their first demo. The EP has been remastered and remixed, and now separated to stand proudly on its own, having originally been released as part of three-way split with Crepitation and Kastrated.

I’ve seen Ingested live several times and they are ferocious. 15 years since their formation, ‘Stinking Cesspool of Liquefied Human Remnants’ is a journey back to the band’s brutal slam style. The use of news and movie clips has been utilised to typically gory effect, with the intro ‘Human Abattoir’ right out of the Rob Zombie shock horror locker. From there on, this is a 15-minute ride of intensity, crammed full of structured viciousness which literally shakes the foundations. 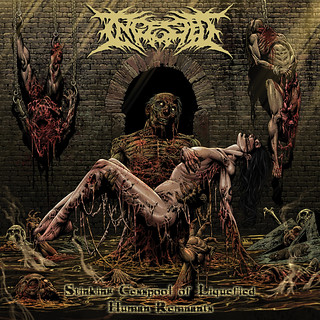 Opening punishment is served in the shape of ‘Butchered and Devoured’, with its huge stomp ushering in a raging torrent of explosive riffing and machine gun drumming, combined with the horrific guttural utterings from vocalist Jay Evans punctured by some crazy high screams that are unworldly. ‘Pre-released Foetal Mush’ is as sensitive as its title, a blend of frantic riffing, which fights to stop from blurring with the other songs. That it does that demonstrates that even in those early days, ingested were conscious of laying strong foundations.

15 years old, the songs still sound fresh thanks to the excellent remastering. ‘Stinking Cesspool of Liquefied Human Remnants’ should be of interest to those who follow the band today. It’s an interesting trip back to those early days of Ingested and one well worth a listen should you like your death metal served cold and brutally heavy.