“The only acceptable cover is an abstract one!” screams the blurb on the latest release from Polish trio purveyors of psychic doom, Weird Tales. Retelling four legendary blues artists with their own peculiar take, this may well be your first exposure to the band who have been around since 2015 and who already have an impressive catalogue forming. The band take four blues staples and cover them with a sizeable portion of downtuned doom which has become the band’s trademark. This is both a homage and an acknowledgement of the influence of the blues artists who laid the foundations of music back almost a century ago, this is anything but a set of standard covers. 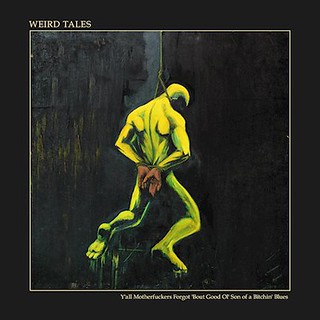 ‘Got the Blues for Murder Only’ is the first to get the Weird treatment, and as if to prove a point, it is totally unrecognisable from Lonnie Johnson’s curious version. Crashing riffs laced with psychedelic juices combine for a gargantuan serving of mind warping music. That version is strange enough but the massive riffs and harrowing vocals that dominate the cover of Skip James’ ‘Hard Time on the Killing Floor’ shift things to another level. It’s so heavy that teutonic plates shift.

The glacial pace of movement which introduces ‘Too Fucking Cold, Too Fucking Dark’ is gargantuan, and I don’t even know or care who did the original because this is never going to sound anything like it. Riffs so heavy that they pin your head to the floor, this seven-minute epic is a pounding, driving beast which leads to then final track on this bizarre EP. Muddy Waters’ ‘Take Sick and Die’, or to give it its full title, You Gotta Take Sick and Die One of These Days’ is given a real working over, and it’s only the lyrics that share any familiarity with that 1942 song.

As a concept, I think this is brilliant. Taking classic songs from music’s early roots, twisting them, and presenting them as a completely different and barely recognisable. Wrapped up with the essence of the band, those heavy pulsing riffs and the searching psychedelic elements provides an EP that is certainly one of the more interesting releases of 2021.