Viking metal. A genre formed out of the early black metal of Bathory and Enslaved, taken forward heroically by the death metal of Enisferum and Amon Amarth before the folk metal of Korkiplaani and Eluvietie expanded the genre further. It covers a range of styles that can both delight and enrage, and it seems to have no limit on the number of bands who are currently sailing their longboats into battle. It also attracts some right looney tunes who seem to enjoy running round with drinking horns, pointy helmets, and inflatable weapons. Most of them would run in the other direction if they came within a longsword’s swing of a real Viking.

‘Raven’s Way’ is a real mixture of all those influences and a few more as well. Littered with sound effects, from the cry of the raven to the sound of the waves lapping the shore and crashing against the longboat, solo artist Feskarn (Niklas Larsson) embraces technology with both hands, incorporating synths alongside the usual instruments for a richer, varied, and layered sound that isn’t easily pigeon-holed. It’s easy to see why before he joined the Viking movement his music of choice was electronica. The album is saturated with the exact opposite of what most Viking bands deliver. There is nothing in common with Bathory and those early purveyors. I’m not making a judgement here, merely an observation. 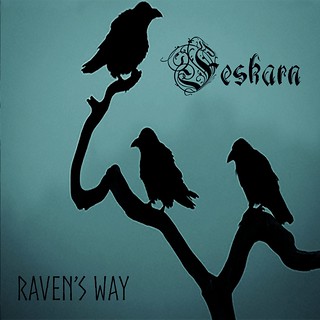 ‘Raven’s Way’ carries the solo artist stamp. It’s clever, well collated and crafted but occasionally lacks the breadth that writing with multiple musicians often provides. There are ample driving riffs, dark and guttural roaring vocals that fit in nicely with the themes on offer. For the heavy enthusiast there is the raging ‘War’ with its driving double kicking and crashing riffs or the cantering of the title track which opens the album with its programmed drumming, screams galore and the electronic overtones. Plenty of folk and traditional instrumentation included, such as the hurdy gurdy intro on Strong from Nature and the melodic heralding of ‘Yggdrasil’ and the epic ‘The Frost of the Fallen’ which is possibly the standout song here, a combination of all the styles used, with the brittle black metal edge providing the dramatic and climactic finale before the tongue in cheek ‘Ein Bier’.

With such a contrast of styles it’s difficult to really get your head around this record. It’s certainly varied, with the use of the mouth harp and its soothing tones creating tension as well as challenging clashes with the more aggressive and straight on heavy metal tones that are also plentiful throughout. Does it fit together? Well, in part yes. And maybe it sits more comfortably than I give it credit. I like my Viking metal with lashings of mead and straight to the point. Amon Amarth raise my (drinking) horn. But just because ‘Raven’s Way’ isn’t going to be on my list of immediate purchases doesn’t mean you shouldn’t give it a go.